Back in 2009, LEGO partnered with Japanese company Muji and it’s hard to see why. The former is a Danish toy company known for making plastic bricks while the latter is a retail company widely known for its clothing, furniture, and stationery, just to name a few. So, what really spurred LEGO and Muji to come together? Inspiring creativity.

Their joint venture resulted in a number of playsets that used both LEGO and paper to add a whole new dimension to your builds. Inside the sets, you would find pieces of paper to cut along with some LEGO studs. After cutting out the prerequisite shapes, you would assemble them by snapping the LEGO studs together. 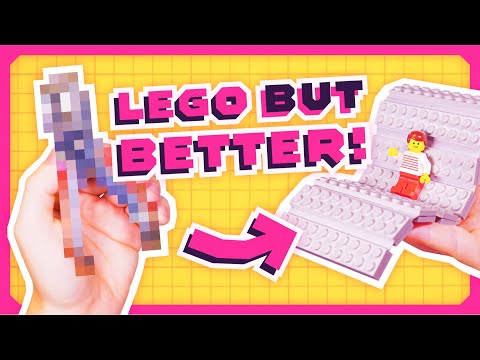 And the crux of all this? A simple stud puncher. Dubbed the LEGO Muji One Hole Puncher, this devious little thing would punch a 5.1 mm hole in your paper so that a single LEGO stud would fit perfectly inside it.

The concept worked well for punching a single hole but sadly, the puncher had a couple of design flaws.

For one thing, punching more than a single hole for a multi-studded LEGO piece was difficult. You could mark your holes with a provided stencil, but since the stud puncher wasn’t transparent, you would be hard-pressed to find your markers at all.

Another issue was the hole diameter. While the 5.1 mm hole was just right for a LEGO stud, it was a little too perfect. There was no room for error when punching these holes. If you got it wrong the first time, chances are you would find a hole too small or too easy to rip apart.

Thankfully, there are a couple of easy fixes to those problems.

Instead of the official stud puncher, you could use an ordinary single-hole puncher. They’re easy to find, relatively cheap, and produce more forgiving holes with 6.0 mm diameters. Most single-hole punchers even have an open front so you can easily see your stencil markers before punching.

As for the stencil, while it doesn’t really need that much of an overhaul, YouTube channel Playfool decided to make their own improved version. The pink stencil has more holes (20, to be exact), is made from laser-cut acrylic, and is much harder to lose due to its color.

Now that punching holes into paper is easier, you can focus on being creative with your LEGO-paper mashups.

Why not try making a giant puppet by connecting multiple paper pieces? How about using different colored papers to create a colorful, moving fish? Daniel of Playfool even switched it up and used the paper as the connecting material to make a LEGO bowtie. Since the LEGO – Muji sets never really caught on, the lack of a manual means you can get as creative as you want!

If you want to make your own LEGO hole stencil, Daniel Coppen has made all the resources available here. You can also buy the stencil on the Playfool store for US$10, if you’re not feeling particularly creative.