Before fidget cubes and fidget spinners were even a thing, man’s best cure for anxiety was the ordinary pen. Ever present in school and work, these cheap writing materials could be spun, flicked, clicked, and in some cases even chewed on to get rid of pent-up energy.

Designer Shin Feng has the same fidgeting problem; but instead of buying a fidget spinner or poking his eye out, he created a pen and pen holder combo to calm his restless hands.

The SPECTA pen is an EDC writing tool meant for fidgeting. While chewing on its aluminum body isn’t advisable, twisting the individual metal scales is a satisfying way to pass the time while waiting for inspiration to strike. The pen operates silently; meaning you won’t disturb others who aren’t particular to your pen-clicking rendition of Bohemian Rhapsody. 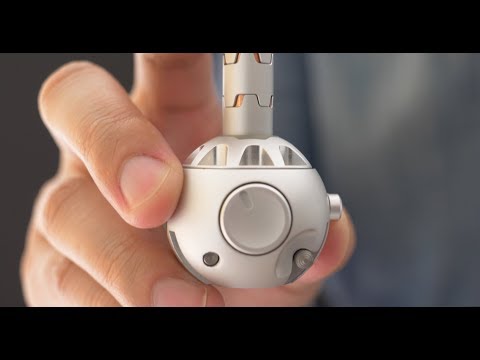 From a pure functionality standpoint, SPECTA has all the things a pen normally has.

It has a ballpoint cartridge for writing and sketching:

The SPECTA comes available in aluminum, copper, or brass, depending on which color you want or what your favorite metal is—with each weighing roughly 46g:

But that’s not all. The accompanying spherical SPECTA pen holder includes a bevy of ‘fidgetable’ features for when it isn’t holding the pen:

The aluminum SPECTA ball has a turning top-ring bezel, which can be turned to produce a clicking sound, not unlike a bezel on a watch:

It also has a bottle opener which flicks out like a pocket knife:

There’s also a silent button you can press repeatedly. It doesn’t do anything in particular, but if you like having a sense of purpose, just imagine this activates an underground bunker for the inevitable apocalypse:

And for those who absolutely can’t give up their fidget spinner, the SPECTA ball has two integrated spinners on either side. These are installed with two independent ball bearings, allowing you to keep up with the now-defunct fidget spinner craze:

For those who prefer to fidget a little softer, a small silicone nub is also included:

The last feature of the SPECTA ball is a hole which accepts ¼” hex bits—essentially transforming it into an easy-use screwdriver for those spontaneous, on-the-spot repairs:

Sin Feng went through many design iterations and prototypes before coming up with the final SPECTA pen and ball, but his desire to keep things simple and sleek remains throughout the production process. The metallic nature of the pen and the individual parts underwent few revisions, as the finished product almost precisely mirrors the concept art.

The SPECTA project is up on Kickstarter and has already achieved $8,350 of its $59,000 goal. You can find out more about this fidget writing tool over on the SPECTA webpage.

How To Manufacture Your Product as a Bootstrapping Startup

Cool Tools of Doom: ‘The Measure of Man and Woman’ by Henry Dreyfuss