Considering how much time we spend at our keyboards (well, many of us anyways), even the slightest of design changes can make a world of difference in how we interact with our digital toolkits – good or bad. Apple understands this and has even brought their latest keyboard technologies front and center for their latest Macbook design. But for those who want full control of their keyboard layout, a new Kickstarter campaign just might provide the answer for one of the most ergonomic keyboard setups we’ve seen yet.

The result of over three years in development, the Model 01 from Bay Area startup Keyboardio is described by the company as “an heirloom-grade keyboard for serious typists”.

Starting with an adjustable enclosure that’s “designed for human hands” and milled from two blocks of solid maple, the Model 01 omits the increasingly common shallow keyswitches in favor of tactile mechanical keyswitches that are similar to those found on the original Apple II. Impressively, each of the 64 individual keycaps were custom-sculpted to provide a gentle guide and rest for each finger. 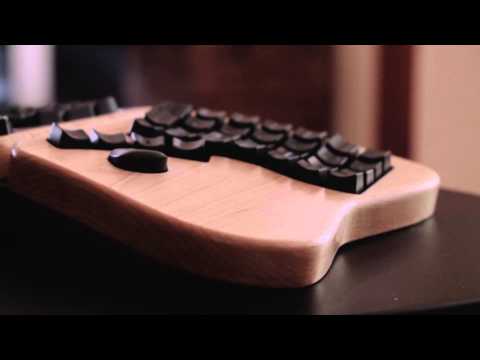 “It’s taken two and a half years, far longer than we could have possibly imagined,” says the husband and wife Keyboardio team on their Kickstarter page.

“We’ve had to learn 3D modeling, electrical engineering, soldering, lasercutting, 3D printing, and CNC milling. We’ve built dozens of prototypes and put them in front of hundreds of enthusiastic folks who type too much, including programmers, journalists, bloggers, writers, and gamers, to name just a few. People keep telling us to ‘shut up and take my money,’ but we’ve taken our time because we really, really wanted to get this right.”

If the early success of their Kickstarter campaign is any indication, they certainly got something right. Currently, the campaign is sitting at over $344,000 (with an original goal of $120,000) and has nearly three weeks left to go before the Model 01 enters production.

We spent about eight months believing we were five weeks from Kickstarter.

We recently had the chance to talk with Keyboardio founder and lead design engineer Jesse Vincent more about his background (which doesn’t involve hardware design), how the idea for a keyboard even came about, how he approached the design process for the Model 01 and more.

Hey Jesse! Can you tell us a little bit about your background?

I’m a software guy by trade. After a brief stint at Microsoft and a dotcom during the first internet boom, I started a company to sell support and custom development for Request Tracker, an open source issue tracking system I wrote. Before Keyboardio, I also wrote a reasonably popular email client for Android called K-9 Mail and spent a couple years as the project leader for the Perl programming language.

How did the idea for the keyboard come about?

I’ve had bad wrists and RSI issues since college and have been through just about every alternative keyboard out there. A few years ago, a startup I’d been working on failed and I decided to take some time off to explore new ideas. At some point, knowing nothing about hardware design, I decided to try to build myself a keyboard. I figured it might take me a month and then I’d get back to software.

How did you kickstart the design process and what did it involve?

I started off with a lot of reading. Before I started on my first prototype, I read easily over 100 academic papers about keyboard design and went through hundreds of historical keyboard patents. Early on, my prototypes were big lumps of modeling clay with keycaps stuck in them. From there, I started designing my first working keyboards in OmniGraffle, a Mac vector drawing program that’s better suited to drawing Org-charts than designing hardware. I used PDFs generated from OmniGraffle to lasercut sheets of acrylic, which, when stacked up, built a reasonable facsimile of a usable keyboard. I flirted with 3D printing, but when our 3D printer caught fire, it quickly lost its allure.

As somebody with minimal CAD and hardware design experience, what factors made you choose to use Fusion 360 to create your CAD models?

Before this project, I’d never used a CAD package for more than a few minutes. Early in development, I attempted to use Inventor, Solidworks, and Rhino, but none of them really worked well for me. Fusion 360 was the first package that hit the sweet spot for power and ease of use. As a Mac user, the fact that I don’t need a separate Windows machine to get work done has been incredibly useful. Autodesk, also, have been fantastic to work with–yes, they gave us free Fusion 360 licenses as part of their startup deal, but what’s really surprised me has been the level of support we’ve gotten from them. At one point, I hit a crashing bug in 360. That’s never a great thing, but imagine my surprise when I got email from a developer the next morning who stepped me through reproducing the issue and reported about 12 hours later that he’d fixed the bug for the next week’s rolling release. I’ve rarely gotten support that good for products I pay through the nose for.

What were a couple of your favorite features of Fusion 360 while designing the product?

The collaboration tools have been a total lifesaver as I’ve been working with mentors and contractors. Knowing that everyone has access to live, current versions of my models has helped me avoid all sorts of crazy version-skew issues.

The CAM engine, too, has been really nice to work with. We have a ShopBot in the garage and having a real CAM system generating our G-Code is…well, it’s actually a lot of fun.

It’s going to take longer than you expect to get right. The closer to the final product you can make your prototype, the better.

With your final iteration in hand, at what point did you know that you were ready to launch the Kickstarter campaign?

We spent about eight months believing we were five weeks from Kickstarter. The two things that took far longer than expected were getting ‘nearly-final’ prototypes ready and into the hands of beta testers we trusted to give us honest feedback and putting together a compelling video. Truth be told, I wasn’t entirely sure we were ready to launch on Kickstarter when we did.

What advice would you give to somebody like yourself who may be thinking of launching their own product design idea on Kickstarter?

It’s going to take longer than you expect to get right. The closer to the final product you can make your prototype, the better.

Build a community, not just a mailing list. We spent two years blogging about our prototypes, going to meetups and answering pretty much every email or tweet someone sent us.

Be honest and genuine with your backers. Listen to what they’re asking–you don’t have to (and shouldn’t) implement every feature they request, but you’ll learn a lot by talking with them about what they want and why.

Finally, and most importantly, where can we find the best doughnut in the Bay Area and what kind of doughnut is it?

We’re recent transplants from the East coast and haven’t made any fantastic doughnut discoveries, but we have been systematically working through the local bagel options. So far, our favorites are both in Oakland–Beauty’s makes a fantastic Montreal-style bagel and the Authentic Bagel Company in Jack London Square does a pretty good New York-style bagel.

For those interested in purchasing their own Model 01, the price of a unit starts at $299 with an estimated shipping date of April 2016 over on Kickstarter.

IFTTT Introduces 'The Maker Channel' for Makers and Hardware Developers