For some weird, unspoken reason, it bet you have dreamt of swimming in a pool of Jell-O before. Perhaps, triggered by subliminal product placement? Or maybe it’s just because swimming in a sea of sweetened gelatin is just something every child (and child at heart) with a sweet tooth would want.

Just so you know, there have been tons (and I mean TONS) of attempts at making Jell-O-filled pools that have been done before. (Well, this is certainly a dream-come-true for those people!) And while the process of making each attempt or experiment is different, most have one thing in common: they don’t look like Jell-O. It could be the way they fill the pool or the product they use. 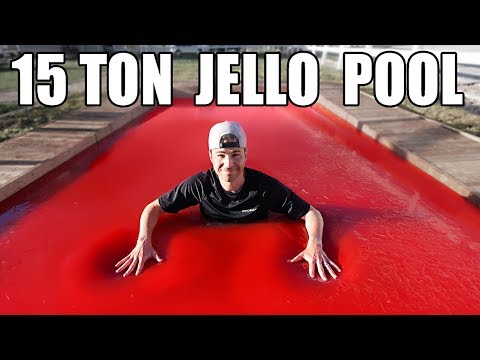 Here enters Mark Rober – a mechanical engineer and former NASA and Apple employee. Nowadays he puts his engineering skills in use to flaunt his acts on YouTube and like the rest of us, he has the same dream of making an authentic pool of Jell-O.

According to Mark, the reason most Jell-O pools don’t work is because of the small scale production of the material, causing it to be smushed when thrown into the pool in small batches.

In order to recreate this on a large scale, Mark first does a ton of experiments with different amounts of Jell-O to find out the perfect temperatures needed to both heat and cool large amounts of gelatin.

Once he realized any Jell-O mixture should be heated to at least 71°C for the hardening reaction to occur, he and his brother dug up a pool-sized hole and used six 55 gallon drums to hold their Jell-O. These drums are fitted with custom propane burners beneath them to heat the Jell-O at the desired temperature. Also, they have propped the tanks over the pool, so they can easily pour the Jell-O into it using spigots and tubes.

That’s the heating problem taken care of, but what about the cooling?

Instead of creating a massive, energy-consuming refrigerator, Mark instead opts to use the weather to his advantage. Using weather forecasts and a good old thermometer he has placed in his brother’s backyard, Mark has managed to determine a three-week period near the end of April and the start of May in which the nightly temperature would be sufficient enough to cool the pool of Jell-O.

With a plan in mind, he and his family get to work. Seven days before a planned Jell-O pool party, they begin filling the pool with 10 barrels (roughly 550 gallons) of gelatin mix per day. Every night, the cold air cools the poured mixture, giving each section ample time to solidify before the next day’s pouring.

Slowly but surely, the pool starts to fill up with gelatin. To help the heated gelatin mix cool faster, Mark and his family are lucky enough to have a neighbor who has a spare evaporative cooler. This, coupled with the night air, has allowed for more convection cooling which will replace the escaping heat from the Jell-O with colder air above it.

So after seven days of long, arduous work, is it worth it?

You bet your money: it is a success! Seeing the first-ever belly flop into a real pool of gelatin is only made more awesome when you capture it in slow motion. Once they have realized they are successful in their efforts, all the adults in the vicinity promptly revert back to their 10-year-old selves and take a dip in the pool.

Of course, Jell-O only remains solid for as long as you don’t touch it, and constant swimming (coupled with the heat from the sun) will slowly liquefy the gelatin. Mark admits that if he were to do this again, he would install a pipe cooling system that would help chill the lower layers of Jell-O.

Still, both the kids and the kids at heart make the most of the gelatin pool when they can. They dive into it, search for toys at the bottom of the pool, and when it starts to liquefy, they throw some of the gelatin onto a slip and slide!

I’m glad Mark Rober has made the jump to YouTube, because now he can use all his NASA and mechanical engineering expertise to make fun stuff like this for all of us to enjoy!