If you have you ever held a film projector before, chances are you have probably heard the distinct clacking noise that comes with using it. The sound comes from the Geneva Drive, a mechanism which gets its name from the 17th century Swiss watches it used to power. 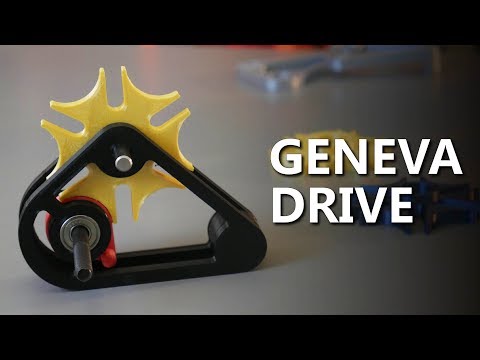 In a video by the Maker’s Muse YouTube channel, they take a look at how the Geneva Drive takes continuous rotational movement and turns it into precise, indexed, movement.

One of the earliest mechanisms which translates index movement, the drive consists of a rotating drive wheel which forcibly locks into one of the driven wheel’s many slots (known as “dwells”). The driven wheel can consist of as little as three slots to a more complex eighteen slots. This hard switching between dwells is what gives the Geneva drive a sound of someone clicking their tongue at a breakneck speed.

While the external Geneva drive is the most popular design, there are variants to the traditional formula. There is the spherical Geneva drive which is set at a 90 degree angle, and a variation to the external drive called the Geneva stop, which locks into place and cannot be moved any further.

Unlike smoother transition methods, the rotations of the Geneva drive are more violent and therefore tend to be a lot quicker. It’s this fast transition between dwells which makes applying the mechanism to film projectors so useful. In keeping the time between frames to a minimum, the Geneva drive can project a seamless scene of Clint Eastwood smoking a cigar.

They are even used in old production CNC machines. Because precision and accuracy are important in the manufacturing process, specialized Geneva drives are programmed to rotate different production lines.

Sadly, the whole concept of the Geneva drive is outdated and outclassed by more modern transitions. Unlike gears which constantly rotate while in contact with each other, the parts of the Geneva drive violently snap together and thus are often subject to wear.

The drive wheel exerts a lot of pressure onto the driven wheel which causes a lot of friction to build up and lowers the lifespan of the mechanism. Though the heat and friction can be lessened by applying lubricants like oil, even the smallest amount of wear can drastically affect the precision of the machine.

With the prevalence of automated machinery, ensuring a device’s precision with parts like mechanical servos has become easier than ever. Not only that, but the components which power modern machines are a lot cheaper and last far longer than any Geneva drive.

It may have that distinct noise, but the Geneva drive is best used for nostalgic purposes only.