Lots of toys allow kids to get creative and build their own designs. If you can count the number of times LEGO blocks have furthered a young ones’ learning capabilities, you have way too many fingers on your hands. But what if your kids (or you) want to build something a bit bigger, more practical, and less…well, blocky? 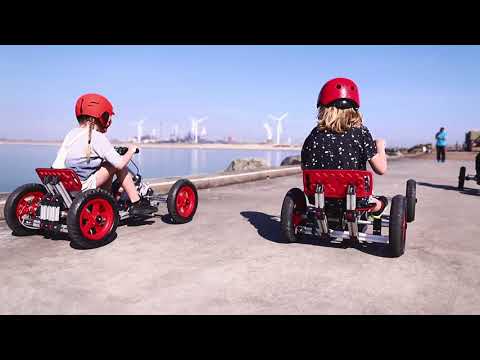 Infento is a company bringing the world its first constructible rides as a series of modular kits which allow kids and parents to build ridable designs together. Using a single hex key to connect the pieces, you can work together to assemble vehicles such as tricycles, bikes, wagons, and go-karts. Think of it like LEGO; only instead of making small builds and prototypes, you’re creating builds meant for carrying small human beings.

As you might expect, crafting the vehicles teaches children a variety of developmental and early STEM skills. Apart from having a unique set of wheels to share with their friends, they also get to stretch their creative muscles, learn proper building skills, and spend time with their family (which may be preferred over the ever-present iPad).

The initial Infento lineup launched back in 2015, but for 2018, the company is launching six new kits (one of which is all-electrical) and three new inventions. 32 new rides will be craftable with the new product line, allowing families to explore, even get a little wacky, with their builds.

The Explorer Kit
The first new kit is the $179 Explorer Kit, which allows for 11 different builds for kids aged 0-8-years-old. Depending on the child’s age, the kit can be adjusted to their motor skills. For example, younger children who aren’t old enough to walk can make use of the wagon-type Wallaroo. Inversely, kids 6-years-old and above with finer motor skills can already make use of the Funboard – a skateboard-like build meant for ruling the neighborhood streets.

The Pioneer Kit
Kids 6-14-years-old who find the Explorer Kit too easy have the Pioneer kit. Costing the same $179 as the Explorer Kit, this more advanced set has seven buildable rides, including the aforementioned Funboard.

The Smart Kit
The Smart Kit includes all the rides from both the Explorer and Pioneer kits and adds an extra three buildable rides, bringing the total to 20. It costs $299, so unless you plan on making all those vehicles (or just the Tornado, Twister, and Roller rides which come with the kit), then you might be better off with the cheaper kits.

The Genius Kit
Those who want their kids to live out their failed engineering dreams can invest in the more expensive Genius Kit. Including the rides from the Explorer, Pioneer, and Smart Kits, as well as adding the more advanced Ox, Speedster, Biker, Whirl, and Cabby rides, this kit has 25 buildable vehicles in total for $499.

The Volt Kit
While the other kits quarrel to see who has the highest number of buildable vehicles, the Volt Kit is the only all-electric kit whose rides run on a 2-speed electric motor and ePulse system. Six rides can be built using the kit, and while the number isn’t quite up there with the Genius Kit, having an electric Hot Rod which doesn’t emit any greenhouse gases is a joy only your kid can experience.

The Legend Kit
For those with too much money and free time on their hands, the final Legend Kit has all the buildable rides from the previous kits, including the Volt Kit. It costs $999 to purchase all the vehicles but considering your children’s happiness and future may be on the line, money shouldn’t be a problem, right?

Stabilizr
The Stabilizr is composed of two stabilizer blocks and four colored rubber strings which keep a vehicle balanced. Grey strings are more elastic and are meant to support the weight of younger riders. As the kids grow older and harder to tolerate, you can replace the grey strings with the much more resistant black strings. Another way to utilize these strings is to mix and match different types to get the desired elasticity for your vehicle.

Infento ePulse
Following the first Kickstarter’s success, people started asking Infento for electric versions of their rides. Since most electric systems available on the market are either too expensive or can’t keep up with the Infento rides’ power requirements, the company decided to make their own component instead.  This spurred the invention of the ePulse system.

Most of the design work for the ePulse started with, you guessed it, early experimentations in CAD. The finished part had to look cool and hold all the components in its housing, while still being easy to assemble and able to handle punishment from all the use it will get. Using a virtual model, the design team underwent a rigorous back-and-forth process to make all the components fit into the proposed system.

One of the first concepts for the ePulse looked like a valve cover. While gearheads and plumbers would definitely find it cool-looking, others who aren’t in the profession of heavy machinery or pipe fixing might think otherwise.

The final design looks a lot sleeker and is more reminiscent of a motor. The positioning of the connectors was inspired by spark plugs, while a motor’s engine cover inspires the back of the housing.

The ePulse system powers the electric rides of the Volt Kit. It consists mainly of four components: a BLDC motor, a motor controller, a 4Ah Lithium-ion battery, and a throttle. The battery can run continuously at a 22.2V 6S2P configuration for 60 minutes on a 2-hour charge while the motor is fitted with a planetary gearbox to keep the vehicles operating under the proper speed limits (it might not be good to have a smart child become a speed demon in the process).

Controlling the system requires the use of the motor controller and the throttle. The controller tracks the position of the motor rotor and drives the coils. It also has safety features which allow speed limits to be set and handles throttle input.

Lastly, the throttle includes a hall sensor and magnet in the handle. Whenever the magnet moves relative to the hall sensor, it outputs a different voltage level which is interpreted by the motor controller. This also allows the system to change speed and go in reverse.

Driftlock
As for the final invention, the Driftlock system is incorporated into the Infento wheels themselves. Positioning blocks can be placed on the wheels, allowing you to either let your vehicle drift like caster wheels or be locked in place. If you’re any fan of the word “fun,” it would be best to keep these free to allow the ride to swivel and spin freely.

With all these kits and features, it isn’t surprising the project already exceeded its initial $50,000 Kickstarter goal by over ten times (its current funding sits at $518,183). We’ve only scratched the surface of these easy-to-assemble but highly intricate modular kits. You can read more on each individual buildable ride and invention over on the Infento Kickstarter page.