Although many of industrial designer Eric Strebel’s take on prototyping projects are of his methods, he isn’t above sticking to the book every once in a while. In his newest video, he shows how he works with a design brief for a wireless charger.

The brief comes with a couple of specifics: it must be made from existing hardware and use sustainable materials it should have minimal moving parts, and you should be able to charge your phone while using it either horizontally or vertically. These restrictions seem pretty straightforward and still give Strebel a lot of creative freedom to do what he does best: design. 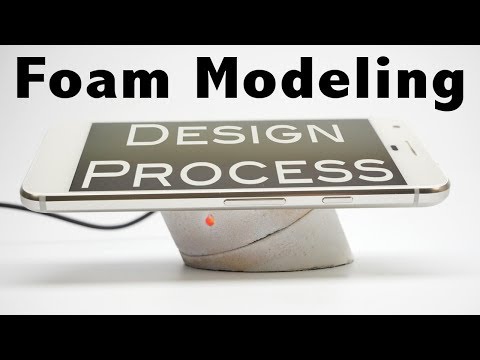 Strebel begins by sketching out a concept for a charger which works both horizontally and vertically. He comes up with various sketches, but in the end, chooses on a simple rotating design which looks at home in an Apple store.

Once his mind is set on this millennial-friendly design, he creates a prototype to prove it works. Using his bandsaw, he cuts two number of circular PVC pieces at a 25-degree angle. As soon as he adds a small ring on the inside of one piece and connects it to the other, he sees the concept will work out just fine.

He then does a more refined orthographic sketch of his prototype. This includes all the little details, such as various measurements of the tubes and how the phone will rest on the charger.

Tossing away his initial PVC prototype, Strebel starts working with a considerable chunk of urethane foam. He cuts off a cylindrical piece ideal for his prototype and adds a small hole at the bottom. This piece is then connected to a faceplate, which he superglues the foam onto before taking it to his drill press machine.

The goal here is to make a 62mm tube just like the one in the concept design. Strebel unceremoniously sticks a chisel into his device and continuously jams it into the prototype to create the gaps he needs.

Once the part is done, he removes the superglue connecting the prototype to the turning plate and creates a foam sleeve for the tube. The sleeve is there to make sure the tube doesn’t crumble or get contorted as he starts cutting it at a 25-degree angle. He makes another 90-degree cut farther down the tube to split it in two and form the base pieces of his smartphone charger.

He superglues a circular piece of foam onto one piece and uses it to connect his two pieces, effectively creating a rotating prototype.

For the top portion of the prototype, Strebel glues on a piece of urethane foam to mask how hollow it is on the inside. But for the bottom, he adds a mixture of resin and ball bearings to add more weight to the charger. He later slathers this in a coat of polyester resin and covers it all with a bit of latex glove to give it a rubber grip.

Strebel then 3D prints a holder to house the electronics which will charge the different phones. He files the holder to hide it inside the foam, cuts out holes which will accommodate the USB port and LED light indicator, and glues a bit of leftover foam on top of it to keep it in place.

Finally, he paints the foam in Shellac to seal it before spraying it white to hide the ugly yellow Shellac tint. Though far from a finished product, Strebel is satisfied that the prototype will meet the client’s checklist of demands.

His next video plans to take this prototype and give it a high-gloss finish. You can find the upcoming video, as well as all of Strebel’s past works, on his YouTube channel.n