Before cyclist Denise Mueller set off to Utah’s Bonneville Salt Flats to break the speed record for fastest person on a bicycle, two others came before. US. Cycling Hall of Fame inductee John Howard who topped-out at 152.2mph in 1985 and Holland’s Fred Rompleburg who managed to cruise at 167mph in 1995.
Like the two men before her, Denise set her record by first being towed behind a modified vehicle outfitted with a fairing that serves two purposes. 1) it allows her to draft the vehicle and avoid wind resistance and 2) the gear system is such that it’s nearly impossible to crank over using your own power. 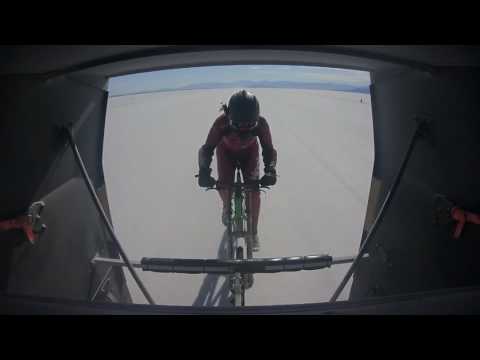 The bicycle was designed by Chris Garcia from SD Wheel Works, with support from KHS Bicycles and Da Vinci Designs, and features an elongated body, 17-inch shaved dragster wheels and steering stabilizers, making it easier to handle the higher speeds without wobbling. The Body Float isolation seat helps further eliminate vibrations in order to maintain a better peddle cadence while grinding on the double-reduction gear system.

The gear system is the secret to garnering higher speeds, as the two 60-tooth gears create around 488-gear inches, perfect for high-power peddling. To put it into perspective, to reach 147mph, Denise would have to peddle at around 102RPMs. To make it to her record speed of 147mph, Denise was towed behind the modified Land Rover pace car to a speed of 90mph before unclipping herself and switching over to peddle power and increased speed.

Her original plan was to beat John Howards speed record but unfortunately didn’t reach that goal but did set the record for the fastest woman on two wheels. Still, she hasn’t given up on becoming the fastest person on a bicycle and is training to reach that goal sometime in the near future. Keep an eye on Denise at Project Speed.