It sounded like Santa was on his way at SolidWorks World 2014… at all times. Santa wasn’t delivering overly packed innovative tech and software, but the I.D. badges everyone wore rang out that signature sound. The way the lanyard connected to the badge holder was with two loosely fitted stamped sheet metal parts. The result – constant jingling and jangling all day long. When one would sit in a quiet room for a talk or a session, the slightest movement would set off a cacophony of clinking that was momentarily as loud as the speaker. The only place it wasn’t much of an issue was at the general assemblies, where loud music and a bellowing sound system drowned out everything, including the groans of all the middle management physiques. It was a problem that needed to be engineered away, and quick. So, I set out to create a solution–THE BADGE SILENCER.

My sketch on the back of a SolidWorks World 2014 schedule. The finished part on the right under a quarter for size reference.

One design caveat… I wanted to use only the tools available at the show.

The one crucial component, SolidWorks itself, gave me the confidence the project could be done. SolidWorks 2014 was installed on countless machines. In the Dassault Systemes floor area, there were about 15 stations with 2014 installed. Waiting for an opportune time I took over one of the stands. In less than 6 minutes, I took my sketch to a 3D model. I copied over the files, the *.sldprt and *.STL files, to a free Nvidia 8GB USB Thumb drive. I needed the STL version so I could import it into Makerbot’s Makerware software.

I needed to find a computer where I could install software. I found one in a lounge area. Hello random computer. I installed Makerware, opened the STL file and placed it on the Replicator 2 virtual printing stage. From download and install to final Makerbot compatible print file took about 5 minutes. I copied said file to the Nvidia USB drive and was off to the Makerbot stand.

SolidWorks of the part I designed at SWW2014.
Into Makerware to prep and position the part.

I told the Makerbot booth people what my project was all about, and they put my part on a Makerbot Replicator 2 immediately. The load was fairly simple, but hit a snag. The Makerbot needed the 3D print file on a SD card or a smaller USB drive. They had me covered, and placed it onto a SD card. Seconds later, the part was already printing. The resolution I had them print at was on the closer side of maximum. Because of this, I had 14 minutes to wait… and wait.

When done, the parts were chiseled off the printing deck/platform. I had to break off some of the plastic to make it look nice, not unlike a tiny ball of spaghetti. A minute later, I was assembling my final badge project. In total, 27 minutes from the sketch I made to my now silent badge. With all the tools on hand… it was a breeze.

My badge mod on the right. The loud metal lanyard on the side for reference.

Later, I found out that SolidWorks 2015 will have direct 3D printing capability. Meaning, I could have just hit print instead of using the Makerware software to convert the STL file. Next time SolidWorks… NEXT TIME! 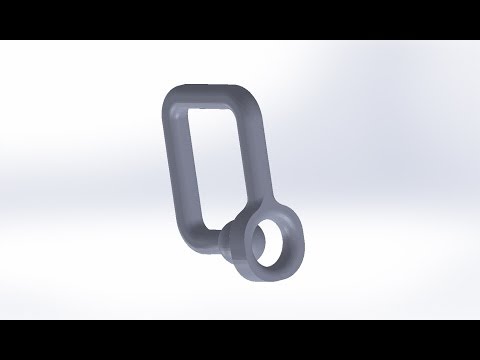 Get Inside the 'Inside 3D Printing' Event NYC (SolidSmack Reader Exclusive)