SolidWorks 'Apps For Kids' Is A Capture It, Shape It, Print It Pack of Possibility

When I was a kid, our “modeling app” was a pile of mud and a stick. Two sticks if we were lucky. Nowadays kids have more apps than they can shake two sticks at, but creative apps for kids have been limited to stacking cubes, coloring puppies and decorating cupcakes. SolidWorks is changing that with six new Apps for Kids, designed for kids 4 and up to build interest in STEM subjects and the product design process.

“SolidWorks Apps for Kids is something that we all hoped that we had when we were growing up.”
– Chin-Loo Lama, Senior UX Design Engineer at SOLIDWORKS

Apps for Kids was announced at SolidWorks World 2016 (SWW16) last week and a major highlight of the conference. People were excited to see this. Parents were excited to see this. Out of all the videos published by SolidWorks over the week of SWW16, the Apps For Kids video has had the highest number of views. If you’re a parent or around young children, you’ve probably set them down for a few lessons in SolidWorks or let them run loose in it. If you don’t have SolidWorks at home however, it’s not the most accessible software to build the spatial acuity of a child. And, while there’s Minecraft and similar games and programs, there’s nothing that focuses on the product design process. That’s what differentiates Dassualt Systemes’ Apps for Kids.

Altogether there are six apps:

Capture ideas and start a design story using pictures, video, or sound. Create inspiration boards, canvases and collages using any device.
Shape ideas into 3D creations of any form. Anything a child can imagine, they can create with this intuitive and easy-to-use modeling tool.
Style the Shape It creations with color, stickers, backgrounds and more. Everyone loves painting, so we even made it possible to paint right onto the model!
Mechanisms are made fun with touch-friendly, snap together shapes that work like they are actually real. Make things move or draw amazing spiral art.
Show off any creation made in SOLIDWORKS Apps for Kids and tell a story using fun interactive slide shows.
Print a creation in 2D, 3D or one of the fun project-based formats and make the creations come to life.

Those who were around in 2004, remember when Dassault released ‘Cosmic Blobs’, a cross-platform 3D modeling software for kids–totally ahead of its time, an ‘app’ before apps were called apps–with sculpting and Mac support that some saw as a sign of things to come for SolidWorks. Whether it was or not, we’ll never know, with the website being shuttered at the end of 2008–right when touch-enabled devices and app stores were picking up interest. I can’t help but think Dassault lost out on a lot of opportunity between the time it discountinued Cosmic Blobs and the release of these Apps For Kids, but it’s great to see them bringing this focus back.

I’m encouraged by what I see so far. My only hope is that the apps are not dumbed-down, or too simplistic–it’s amazing what children can pick up. That the apps are highly accessible across OS and devices, and that context is reinforced across the tools, features and process.

Outside of what was shown at SWW16, details about the SolidWorks Apps for Kids are sparse. Beta is set to start early spring with a release scheduled for spring 2016 with SOLIDWORKS Education Edition. You can find out more and sign up for the beta at appsforkids.solidworks.com 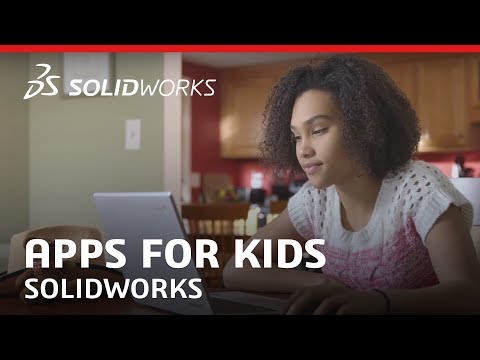