Mathieu Stern is a photographer, and also a collector of old, cheap and weird camera lenses. So, it makes sense that he would set out to create his own 3D printed camera lens, and you know what? “What?” Well, it takes a dang good photo. Check THESE out.

Mathieu says, “I never really learned how to make 3D models on a computer–I started by making a cardboard first prototype with a found lens from 1890 I had in a box. It was ugly and not easy to use but I was able to focus and take the measurements I needed to create a 2D design.”

He got rejected by a lot of 3D printers (because of the cost of creating it and the lack of funds to make it happen), but he finally found a printer willing to take a chance. FABULOUS, a 3D printer in France, took his idea and turned it into a photo shooting prize to behold.

“I met Arnault Coulet, CEO of a French 3D printing agency called FABULOUS. His team and he designed the 3D prototype and printed the lens. Luckily for us, he saw all the crazy potential and fun we could create with this project.”

The lens is simple, a 135mm f/1.8 lens that was made up of two cylinders threaded together. The first cylinder, containing the glass lens (the nineteenth century one he found in a box), moves back and forth to allow focusing. The smaller, inner cylinder attaches to the camera. This section contains a slot for a diaphragm plates with various shapes which add visual effects to the image. The created the 3D model (in Rhino?) and 3d printed it using PLA on a Leapfrog 3D printer.

In the end, it was proof a camera lens could be printed and printed at a cost of only “a few Euro.” You can download the files via Sketchfab! 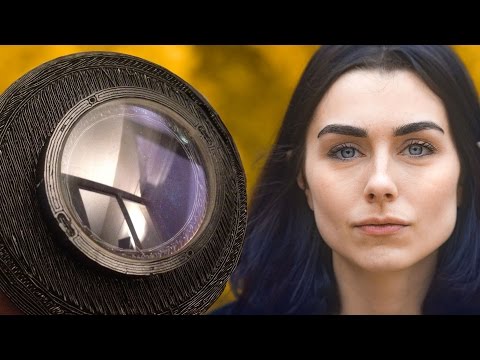