Need an introductory 3D modeling tool? MagicaVoxel is what you need.

And that is precisely what this is. At first glance, the software appears to be a rather simple Minecraft-like block editor, and in many ways, it is just that. But as you get deeper into the system its more powerful features begin to emerge.

The tool installs freely on Windows or MacOS. It launches very quickly and is highly responsive, even on lesser machines.

You’re presented with a simple interface window where you can manipulate the blocks of the 3D model in many different ways. What got me right away was the paradigm they use is anything but “blocks”. In this system, think of them as just voxels that you typically do not individually operate upon.

Instead, you use drag and drop style tools, such as the “line” tool. With that, you can easily draw a line (of blocks) in a simple operation. There are complementary tools to select, move, rescale and erase groups of blocks. It’s a lot like using a 2D pixel-based image tool like PhotoShop.

You can also perform “freehand” operations and then create 3D shapes from your efforts. It’s not exactly spline-level capability, but it’s not bad for an introductory tool.

Another paradigm shift is that this tool recognizes 3D “faces”. If it detects a continuous chunk of flatly-aligned blocks, it considers them a “face” and permits operations on it. What operations? One is a “push-pull” style tool where you can stretch a face in and out – just like you’d see on more powerful 3D CAD tools.

This tool includes a painting function, where you can apply textures to individual blocks – although you’d typically apply a color to a face selection.

MagicaVoxel also includes an ability to duplicate shapes and slightly modify them to create a 3D animation sequence. Basically, you’re creating a series of different scenes much like a 2D flipbook. The built-in renderer is handy for this feature.

Watch this busy video to see even more features: 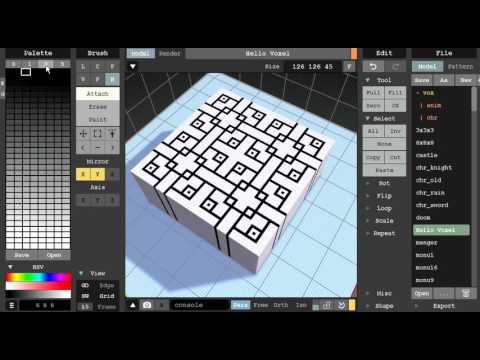 There is a “command” feature where you can enter some simple line commands to create or manipulate 3D objects is a more programmatic fashion. For example, you can quickly create a maze shape with a single command.

MagicaVoxel includes some 3D modeling features I’ve never encountered before, like a shuffling feature that pushes a structure through the workspace – and then wraps it around to the other side automatically.

The features of MagicaVoxel, when combined together in ingenious ways, allows the relatively easy creation of fairly complex 3D objects and scenes. It’s surprisingly easy to use.

For 3D printing, MagicaVoxel permits export of created files in a variety of formats, including .OBJ and .PLY, both of which can handle the color textures. While there is no .STL format export feature, you can very easily convert the .OBJ or .PLY files into .STL if you wish with other external tools like MeshLab (also free).

Is MagicaVoxel going to replace SOLIDWORKS or Fusion 360? Not a chance.

But it is an extremely useful tool that could be used to introduce newcomers to 3D modeling concepts. I would not be afraid to hand this tool over to any child – of any age! The “solid” 3D modeling experience in this tool would easily implant many necessary concepts into young brains that would greatly assist the transition into more powerful professional tools later in life.

Give MagicaVoxel a try – it’s definitely worth it.