Frame Secures $10 Million to Put All of Your Apps (Yes, Including SolidWorks) in the Cloud

The last time we checked in with Frame – the cloud platform that lets users run any software from within their browser – we had the chance to chat with the young startup’s CEO and founder Nikola Bozinovic about the near-future of CAD in the Cloud and how his platform could revolutionize the workflows of artists, designers and engineers for the better.

While there are dedicated Cloud-based apps, Bozinovic’s Frame allows users to install their own software on the company’s servers which can then be used in real-time from any device with a web browser – which effectively gives users the power of a finely-tuned desktop PC workstation within their much lighter $200 netbooks or a Macbook Air.

Today, Bozinovic announced that his platform has secured $10 million from Columbus Nova Technology Partners (CNTP), Bain Capital Ventures and SQN Venture Partners to support the company’s rapid growth as more users look into ways of utilizing the Cloud. Among other things, Frame plans on using the injection of funds to expand their technology to make it more accessible and easy to use for new users.

“After we previewed Frame at Develop3D LIVE in March, we were blown away by the interest to run SOLIDWORKS and other CAD software on Frame from users and businesses from around the world,” said Bozinovic in an email to SolidSmack. “We’re in the middle of the biggest computing platform shift in decades and we’re excited to be bringing the power of the cloud to engineers and designers everywhere.”

In addition to the funding – which is sure to help drill the platform further into CAD in the Cloud discussions – Frame’s new end-user service will go live on July 8 with plans starting at under $10 per month to run any software from the Cloud within Frame’s network of servers.

FRAME PERSONAL is hard to beat. Starting at under $10 a month, you’ll get your own personal cloud computer to install and run all your Windows apps from a single page, directly from your browser. Connect your Dropbox, Google Drive or Box, and free yourself from the desktop forever.

FRAME FOR BUSINESS lets you manage applications and users from a central Dashboard. When you install and publish a new version of software, it becomes instantly available to all of your team members. Plans start at under $15 per user per month, with education plans also available.

FRAME PLATFORM is a solution for software vendors to deliver their desktop software as a web app. Give customers the ability to run your software from any device, regardless of how CPU- or GPU-intensive it is.
Also, you can use Frame to let them try a demo directly from your website in one click. 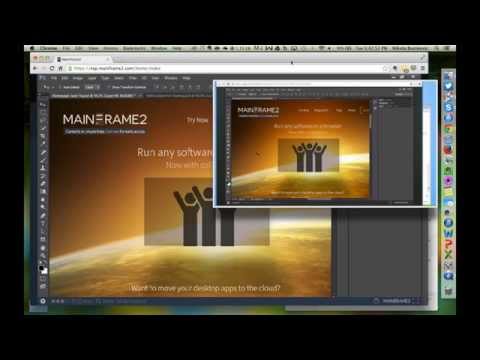 “In 2012, we set out to change the way people think about personal computing,” added Bozinovic. “Today we are taking a significant step toward realizing that goal by letting anyone with an Internet connection access his own cloud computer. We are thrilled to have the strategic support from our investors to help us in our mission.”

Currently the beta for Frame is invite-only, but interested users can sign up prior to July 8th to stay updated on the official release.