If you’ve been fishing, you know the layer of slime that covers the fish, protecting it from your nasty hand bacteria. It’s also a defense mechanism that helps protect the fish from predators and, as it turns out, is much more than what it seems. Particularly in the case of the Hagfish. Researches at MIT’s Media Ecology Lab have discovered a new way to interact with our Hagfish friends via the slime they produce while at the same time developing parametric surface geometry, a development that could very well push product design into your surrounding and away from the desktop.

A small amount of slime is first scraped from the body of an anesthetized Hagfish. Added to distilled water, the tightly bundled cells unravel, immediately binding the threads together to form large amounts of viscous material. This material is highly formable where the addition of electric current manipulates the substance to form on, around, or against items, even to the level of separate ‘parts’ being created, color added or opaqueness adjusted through simple touch/gestural interaction. The slime threads are the key. Dr. Fudge (real name) of the Comparative Biomaterials Lab states:

The slime is composed of fine protein slime threads as well as a mucus component that comes packaged in tiny vesicles. When these components are ejected from the slime glands, they combine synergistically to form a slime mass in which a large volume of water is entrained. Recent work by Julia Herr has investigated the chemical composition of the slime and the mechanisms of mucin vesicle stabilization a deployment. Tim Winegard recently published a paper on the mechanisms of thread skin deployment, which involves the unravelling of 15 cm long threads from subcellular structures…

These “slime threads” are similar to spider silk in their dimensions, but they differ in a couple of important ways that make them excellent candidates for such a biomimetic project. Slime threads are built within cells from intermediate filament proteins via a process of hierarchical self-assembly. This is quite different from the dynamic spinning process that transforms liquid crystalline spider silk proteins in the silk gland into an insoluble fibre.

These slime threads have even more potential for an interactive 3d modeling experience when they are still attached to the creature. Apparently, the Hagfish itself can be used as somewhat of an input device, directing viscosity of the materials, attach points and even patterned geometry.

Here is a video of two of the researchers displaying the very simple extraction and solidification process. 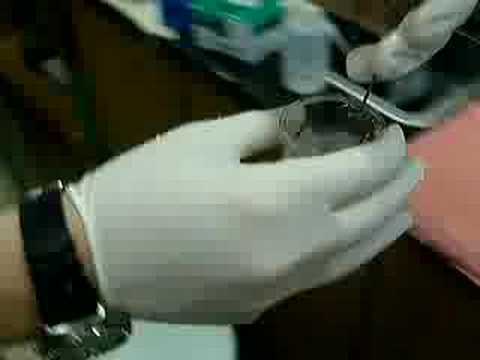 SolidSmack Radio | Bustin' Out (On the Funk)