#AU2015 was, in the literal sense of the word, awesome. Space-time-distortingly gigantic, yes, but also impeccably designed, meticulously planned, and flawlessly executed. And yet, behind the razzmatazz, I’m conflicted.

The team(s) of people who made AU2015 happen deserve a special place in event-planning heaven. The mere thought of housing and herding 10,000+ Mouse Jockeys is truly horrifying, but making it a genuinely enjoyable experience deserves all hats off and a long, slow clap.

The keynote session exemplified the entire experience: dazzling, loud, pounding, flashing, intricate, fun, and clutch-your-chest huge. With that, I must confess that Las Vegas is, well, not my favorite place. 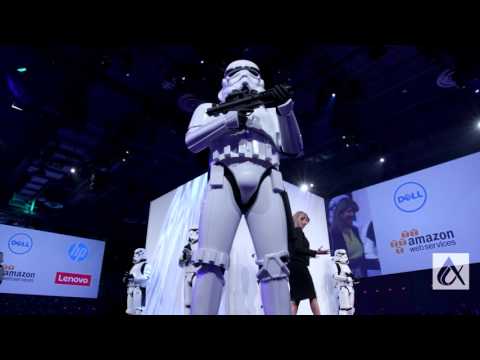 Everything in Vegas is fake. The Venetian sports a fake sky painted on the ceiling over a fake cobblestone street along a fake canal. Along the way you can stop at an oxygen bar to breath some artificially scented fake air. The city itself is a fake oasis–in the middle of a vast and very real desert–made famous by its layers-upon-layers of artifice. In Las Vegas, scale passes for substance, opulence for luxury, nudity for allure. Every inch of the place throbs, blinks, whirs, dingles, whistles, gyrates; the view of TRUMP tower from my room seemed fitting for a place so perpetually loud and yet so utterly, soul-suckingly vapid. I do not like Las Vegas.

I do, however, like my friends, so many of whom were there for AU. It’s ironic to forge real and meaningful relationships in a fake opium den atop a fake taoist temple / bar. (Which, by the way, was hella fun.) These are my people.

I feel a deep tension between my dislike for the fake-ness of Vegas and my love for the very real relationships I’ve built there.

This was on my mind at AU. Like Vegas itself, AU is nothing if not spectacular. It was visually stunning, entertaining, funny, thought provoking, inspiring. (And, at certain moments, WTF.) There were no glitches, no awkward pauses, no cringe-worthy “conversations” between speakers, no late-70’s jazz fusion, and not a single pleated pant in sight.* No reading from slides or teleprompters, no gloppy “ROI” or “speed to market” goo, and tools were “used”, not “utilized” or–god help us–“experienced”.

*At least not on stage. There were, however, a regrettable number of Jeans With Shoes in the crowd. Let’s not even talk about branded polos and khakis.

For all that it was, it was an unmitigated success. And yet.

Craftspeople love their tools almost as much as they love their friends, and digital 3D tools are no different. We spend countless hours with our tools, learning their every quirk and nuance, finding ways to maximize virtues and minimize problems. We are emotionally invested in our tools, their brands, and the people who make them possible for us.

That’s why I feel so conflicted at shows like AU. I want to believe that the people speaking on stage are my friends, colleagues, and fellow sojourners. I hate the idea that those very people might be manipulating me, bribing me with free booze and lavish parties (keep those coming, btw) or using a massive CRM database to make me feel liked and appreciated through targeted PR.

It would be unfair to reduce relationships to the merely transactional, but it would be equally naive to think ADSK doesn’t engineer relationships just as meticulously as it does every other aspect of its business.

All aside, I do love a good show, and if AU2015 is any indication, ADSK puts on a barn-burner. Still, there’s tension.

What I find most funny about the fistpump baby meme is that, in addition to just being a really funny image, it gets funnier when you realize that, in fact, the poor kid has just eaten a handful of sand on the beach, and is looking at the adult holding the camera with a look of puzzlement and uncertainty, not the triumph we ascribe to it. Things aren’t always what they seem.

The Voltera Circuit Board Prototyping Machine is Now Available for Purchase