Garment steamers are the best alternative for clothes iron and steam iron. They are safer for garments as there is no need to use hot sole plates. Most of all, they are much easier to use since most of the latest models now come in handheld forms.

Some garment steamers are even designed in extremely compact forms, making them as portable as possible. With this, chucking them into bags during travels is possible. One example is the isteam H-106 which is the smallest unit we have ever reviewed. It has a water tank that can handle 2 to 3 clothes and can last a maximum of 7 minutes. Apparently, using this for medium to heavy-duty straightening of clothes is not ideal. In that case, bigger units like Jiffy J-2000 is a better choice as it can work non-stop for one and a half hours and it has a wider steamer slot head. Conair Turbo Extreme is also a notable choice worth considering. It boasts two slots on its quilted aluminum steamer plate and plenty of controls from steam level to Boost button.

Our SolidSmack Household Appliance and Tool Research Team tested the ones mentioned above and two more models that scored the highest in our initial shortlist review. To score them, we observe the performance of each unit under actual scenarios by personally testing them on different types of fabrics such as nylon, polyester, silk, satin, cotton, wool, and more. We noted how fast they removed the wrinkles and the number of times we had to run the steam head on the fabric. We also considered their tank capacity and controls in our scoring system, together with other important details like their build and ease of use. That being said, here are the things you should know about each of them:

Handheld garment steamers are great as they offer you great convenience. However, they have one problem: limited tank capacity. This is not the case in Jiffy J-2000. It has a 2.84-liter tank that can last up to 1.5 hours. It takes 2 minutes to produce steam which is a little longer compared to other models. Yet, once it’s ready, it can work continuously and finish a whole basket of clothes.

Its performance is also unbeatable. The 1300-watt power can make the solid brass heating element extremely hot (which can be dangerous around kids), but it can also produce a consistent flow of steam. The plastic steam head measures 6 inches wide, giving you a wide coverage in each pass.

When we tested it, it was as effective as others in removing wrinkles in cotton, polyester, satin, and other fabrics. And while we enjoyed the generous length of its 5-foot flexible hose, we wish its 7-foot power cord was longer. Nonetheless, it is one excellent recommendation we can provide, especially if you are always dealing with tons of wrinkled clothes, bedsheets, and curtains. 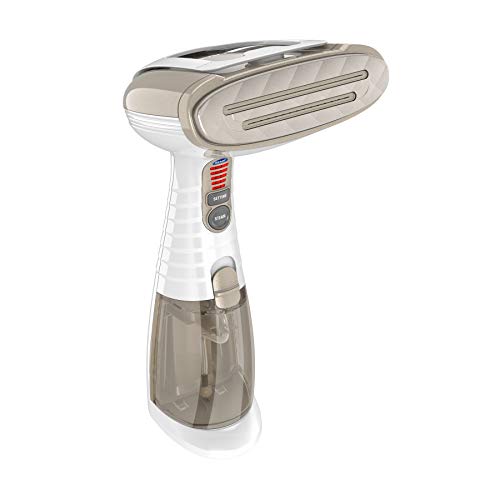 Of all the handheld garment steamers we tested, Conair Turbo Extreme holds all the best qualities you need to remove fabric wrinkles in no time.

It has a decent tank capacity at 7.3 oz or 215 ml. In the package, it is indicated that it can last up to 20 minutes of continuous steam, but we need to remind our readers that it depends on the setting you are using. Indeed, unlike other models, it has 5 steam settings and a Turbo Steam button. This should make things easier for you but what we love the most is the dual-slot quilted aluminum steamer plate. It releases twice the amount of steam of other models, which means its water tank can empty much faster. Nonetheless, we don’t think setting it in the highest setting is a must. In our test, it was very efficient even at the lowest setting.

We found the Turbo button very useful as it gave us the boost we need for thick fabrics. Besides straightening cotton and polyester, it managed to remove big wrinkles of wool! The last type of fabric took us three to four passes to remove the wrinkles, but its effect was almost instant in others! The attachments are also very helpful in our test to achieve these fast results. There’s even a built-in creaser which is another big plus! 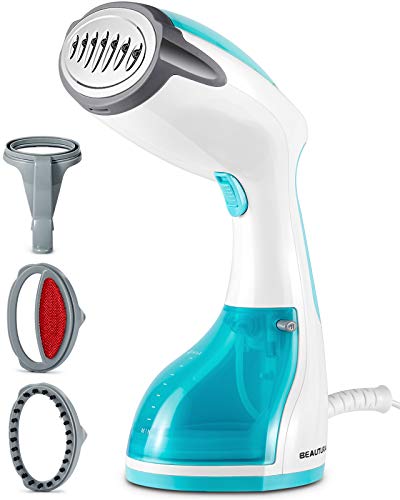 BEAUTURAL 722NA-0001 almost has the same size as the Hilife HL7. Its capacity is only a bit higher at 8.79 oz or 260 ml. Its tank is detachable but pouring water in it is a bit challenging since it has a much smaller hole. Nonetheless, there are lots of good points to love about it.

It is one of the fastest heating garment steamers. In our test, it heated as fast as 35 seconds. The stream of mist was continuous and didn’t even splatter regardless of how we handled the unit. Indeed, it can be titled in any way, making it extremely easy to use. The 360-degree swiveling cord allowed us to move it without problems. Also, besides the lock that enables it to continuously work, there is also an option for burst steam.

In our test, the content lasted for a total of 16 minutes. Its performance was as instant as the other models we tested but what further amazed us about it was the metal plate. Running it on fabrics felt so great and smooth and despite the continuous flow of steam, the plate didn’t produce condensation.

We also received three attachments in the package: lint brush, soft brush, and creaser. The creaser worked and held really well when we tested it on garment pleats. The lint brush, on the other hand, made it possible for us to completely remove wrinkles and lint on a cotton shirt as fast as 2 minutes. 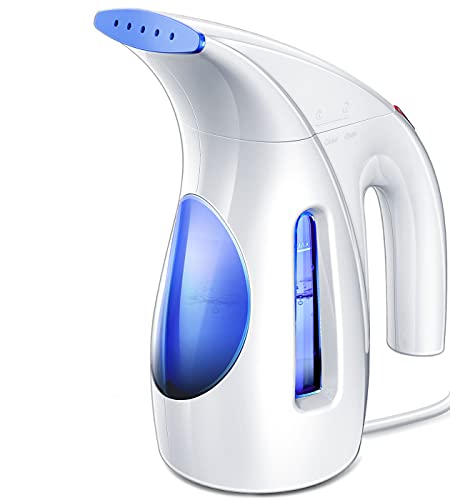 Hilife HL7 is a simple garments teamer model. It has no additional features and it is small. But these things are its own strengths that make it popular in the market.

It has a small capacity which comes at 240 ml. It’s rather limited but this same thing grants it a small body, making it compact and a travel-friendly model. It can fit easily in your baggage.

Operating is very simple. It only has a single switch to activate the unit itself. When we tested it, it heated pretty fast and the steam started to emerge within 2 minutes. We tried it for various garments we prepared, it worked instantly with just a single pass. Even on satin, it performed well though we had to give it a couple more passes. We found the additional brush very effective, especially in cotton. We saw an instant result just in a single run of the unit to a specific wrinkled section of the fabric. The process was so painless even when the fabric was just in a hanger. All in all, it took us 15 minutes before the tank had finally emptied.

On the other hand, it released some tiny splatters of water in some parts of our test but is not as severe as other cheap models. Most of the time, we only experienced fine mist. It is important to note, however, that it can’t be tiled since there is no guard to prevent the water inside from spilling. 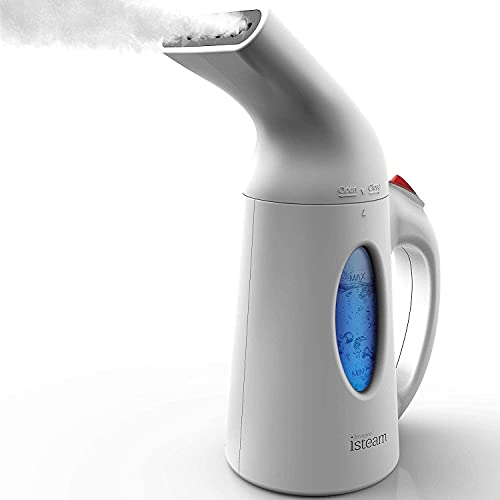 If you want something smaller than  Hilife HL7, the isteam H-106 is the ultimate bag-friendly option there is.

It has a 120 ml tank that is truly small but this gives it the compact body you need with dimensions of 8” x 5.5” x 3.2”. It is extremely lightweight and with its 8-feet power cord, moving it was extremely painless and this is what we really love about it. However, we found out that it doesn’t have a sealing feature that can prevent spills when it is tilted in an awkward position.

On the other hand, it heated up as fast as other models as it only took a minute to release steam in our test. The compact tank lasted 7 minutes due to the automatic shutoff function when the tool detected the low water level. Nonetheless, we had steamed 3 shirts in total in that single fill. It isn’t much but it did pretty well with just a single pass on cotton fabrics. Almost instant in all the natural fibers we tested.

The tank capacity of the garment steamer will determine how long the unit will last before you need to refill it. If you are just looking for a travel-friendly model, a small tank will be enough. However, for home use and other special purposes where you need to handle tons of wrinkled clothes, something as big as the Jiffy J-2000 is a must.

A huge garment steamer will allow you to handle more clothes but storing them needs a big space. With this, it is no wonder why many are opting for handheld models. If you don’t mind their limited tank capacity, it would work.

Garment steamers do not need to be complicated. Just a switch that can activate it is enough. Nonetheless, it will be better if the unit can give you further control over your work. For instance, the Conair Turbo Extreme has a button for Turbo and 5 levels for steam. With such controls, you can use it easily from delicate to thick fabrics.

Removal of wrinkles is the main reason why you need a garment steamer. However, attachments like a bristle brush and lint brush will help you do more. As such, it is better to have a package that includes them.

Is steaming faster than ironing?

The process of removing the wrinkles in fabrics is much faster with a clothes iron. However, you don’t need to position the fabric on a flat surface with a garment steamer which can save you a lot of time.

Can I use tap water in the garment steamer?

There are models designed to work with tap water. Nonetheless, to prolong the life of your garment steamer and prevent mineral buildup, it is suggested to use distilled water.

Can I leave water in my clothes steamer?

It is not suggested to leave water in the garment steamer tank. Also, make sure to clean it regularly to prevent clogging.