For those who prefer starting their ideation sketching sessions on an iPad, there’s a good chance that FiftyThree’s Paper has been tried at least a few times – if it isn’t already the go-to drawing app on their iPad. The freemium app, which features a bundle of stylized drawing tools to aid in the sketching process, has been downloaded by over 13 million users. While the base app is and always has been free, FiftyThree has been able to successfully keep their development engine running through selling premium features that unlocked more drawing tools.

Today, FiftyThree announced that they are unlocking all of those premium drawing tools and anybody who updates or downloads the Paper by FiftyThree app today will have instant access to the Sketch, Outline, Write, Color and Mixer tools, which were previously sold at $.99 a pop.

In total, this expands a tablet sketcher’s arsenal to include a sketching pencil, a watercolor paintbrush, a marker and a ballpoint pen. Previously, the free version of the app only included a fountain pen and a limited color palette. 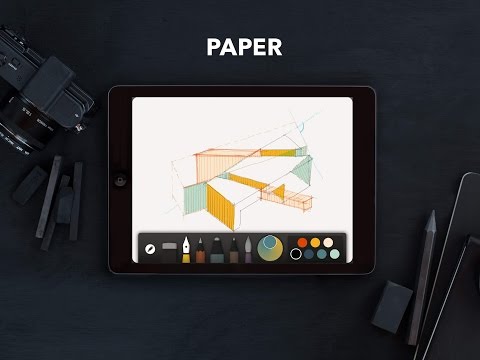 While FiftyThree is certainly hoping to get more users to purchase their Pencil stylus – which has been voted by many as the best iPad stylus – the decision to release their premium options for free actually has its roots settled in their social platforms Mix Made With Paper.

While Mix allows users to create a base sketch and let others around the world build off of it, the Made With Paper sharing network has helped some Paper users become icons with their own unique style while also inspiring others who use the app. In total, the platforms have over 800,000 active users in nearly 200 countries. Additionally, Fifty-Three is currently looking into expanding the app into an enterprise platform for businesses and schools – where it is already being used prominently.

“From the beginning, we looked beyond the typical scenarios for creating. We wondered: what could drawing, sketching, and writing look like in two years? In a decade? As makers and users of digital tools, we strive to simplify complex systems while maximizing functionality. But that’s just us, and we’d love to get your take on it. If you could influence the future of creativity, what tool would you make?”

Among other reasons why the app has proven to be so successful is due to its legions of followers who have launched their own Tumblr blogs, discussion forums and even tutorial sites for mastering the Paper tools and techniques as if it was a real-world physical art medium. Of course, using the Pencil stylus makes everything easier within the app and is worth taking a look at. The company has just announced a pre-order option for a gold edition of their Pencil stylus to add to their existing lineup of wood and graphite-inspired Pencils.

To gain full-access to all of the Paper tools, simply upgrade the app or install as a new user over at the App Store.

Can't Make it to Phoenix? Live Stream SolidWorks World 2015 for Free Next Week

Tracking Applications for Tourists: What to Use on Your Next Vacation

Everything to Know about Casino Apps