Add this to our growing bucket of things we wish we would have thought of before.

The Zcan is a new ergonomic wireless mouse design that lets users swipe in a zigzag motion to scan and instantly digitize analog documents. Currently in the last 40 hours of its campaign over on Indiegogo, the project has raised over $100,000 from its initial goal of only $30,000.

What sets the Zcan apart from other mice/scanner combos is that it connects to your computer over a network to allow your scans to show up immediately on your screen…essentially taking the guesswork out of your hand-eye coordination skills.

While the project is being touted as an easy way to “back up your receipts, contracts, documents and photos anywhere,” it could also be used by designers to instantly get design concepts from their analog sketchbook into their CAD or 2D design programs instantly:

…and to top it all off, the program automatically archives the scans so you could work iteratively without having to go through all the annoying ‘Save As’ commands each and every time.

“Zcan Wireless is powered by Dacuda SLAM Scan®, the technology behind the mouse scanner, was invented in Switzerland. It is based on recent advances in robotics and computer vision research. Dacuda’s patented, proprietary SLAM Scan® technology enables fast data entry of text and images, instant editing, as well as easy sharing of contents.”

Designed by Hong Kong-based Design to Innovation, the Zcan also supports over 199 Optical Character Recognition (OCR) languages and allows users to translate scanned words into another language via a Google Translate shortcut. It has a resolution of up to 400 dpi and can save in the most commonly used file types including JPG, PDF, PNG, Word, Excel and others. Currently, the mouse works with Windows 7 and 8, Mac OSX 10.6 or higher, as well as more recent iOS devices. 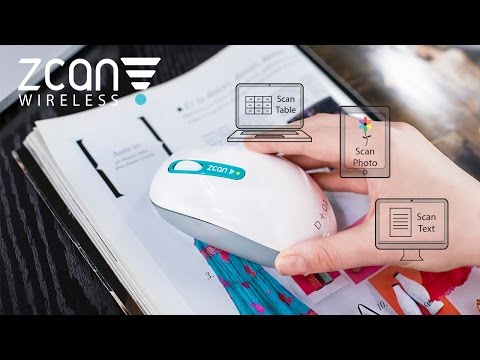 If you’re hot on the ball, you have 40 hours left to pick up a Zcan over at their Indiegogo site for $109.