Considered by many to be one of the most important peripherals in a designer or design engineer’s toolkit, Wacom pen displays and tablets have been seeing some rather dramatic improvements within the past couple of years in regards to both more powerful and ergonomic desktop offerings as well as streamlined and self-contained mobile offerings.

This week, Wacom announced updates to their two most powerful tools in the company’s history: the Cintiq 27QHD and the Cintiq Companion 2. While one is made for a stationary desk environment, the other is made for on-the-go digital sketching with the high-quality pressure sensitivity and build construction that creatives have come to expect.

Known for being bulky and cumbersome for some users, the update to the Cintiq 27QHD includes both a slimmer and lighter design while also increasing the pen display to the largest in Wacom’s history (by three inches). Perhaps the most noticeable feature for those who have previously used a Cintiq is the ExpressKey area. In previous designs for the Cintiq, a strip on the side of the screen featured customizable buttons that a user could program similar to hot keys for quick tool selections. For the updated Cintiq, Wacom has completely removed this strip to reveal an entirely accessible and seamless 2.5K (2560×1440 pixel) display. This time around, the ExpressKeys are accessed via the new ExpressKey Remote, which features a three-mode touch ring and 16 individual customizable buttons. There is also the option for a touchscreen model that allows users to interact with the display with their bare hands. 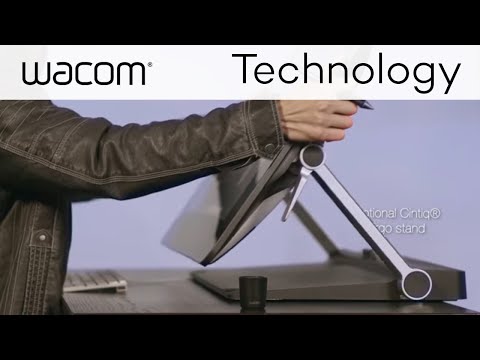 “The standalone ExpressKey Remote empowers users to work the way they want, whether it’s on a desktop or laid directly on their Cintiq 27QHD display,” said Wacom in their announcement. “For those who do their best work with a keyboard, the Cintiq 27QHD’s got plenty of room on its surface to accommodate one. Need even more peripherals? You’ve got access to five USDB3 ports.”

As for the mobile Cintiq Companion 2, the body and brains look relatively similar to the previous Cintiq Companion model that SolidSmack reviewed last year, however with a few updates. After a year of customer feedback, Wacom expanded the lineup to include five different models with varying prices depending on how much power and on-board storage space is needed.

While the 13.3″ display itself has been updated to include the same 2.5K resolution seen in the Cintiq 27QHD, perhaps the biggest improvement is in Wacom’s decision to allow users to use the Cintiq Companion as a standalone desk Cintiq.

“The standout feature on these powerful little machines is the single most requested feature that got implemented — you can connect the new Cintiq Companions to any system you can get an HDMI signal out of with the 2-in-1 cable,” said Wacom. “That’s right, you can plug your Cintiq Companion 2 into a Mac or PC for a Pro-Pen and touch desktop experience when you’re not on the move.”

The Cintiq Companion will be offered in five different models (all running on Windows 8) that are considerably more accessible to more users than the original (and costly) Cintiq Companion:

As for the larger and more expensive Cintiq 27QHD, the standard edition will run approximately $2719.99 while the touchscreen version will be slightly more at approximately $3172.99.

Find out more over at Wacom.

Behind the Design: Osamu Fukuda of Kinfolk Bicycles