Ok, now this is more like it. I’ll try to tell you without choking on the beauty of this, but since my larynx is already convulsing, you may have to proceed on your own. I know, you’ve probably had your fill of web-based 3D modeling applications. What’s that? There aren’t any? You mean, they’re weren’t any… until now.

Tinkercad, a Finland-based startup, has just lunched their public beta after a 6 month development cycle. It brings the simplicity of 3D modeling to the simplicity of the web and, really, it couldn’t be more beautifully done. If you haven’t jumped away already, here’s a look at what you’ll see.

The team founder, Kai Backman (@kaibackman), is a former software developer at Google and now leads Tinkercad as distributed systems programmer. Is Tinkercad for the hardcore large assembly modeler? Not exactly. It lends itself to those interested in learning, discovering and… may I say tinkering?

Tinkercad is targeted at exactly that audience: amateurs, artists and small businesses. Thus, the software is built to be easy to use and fast to learn. It only includes three tools that are restrictive yet powerful. – ArcticStartup

There are actually four tools, Add, Sub, Workplane and Camera. For the most part you’re using Add and Sub(tract). You have super smooth zoom and rotate with the mouse wheel, plus the added simplicity of panning or switching work planes with the click of the right mouse button. It couldn’t be more simple. 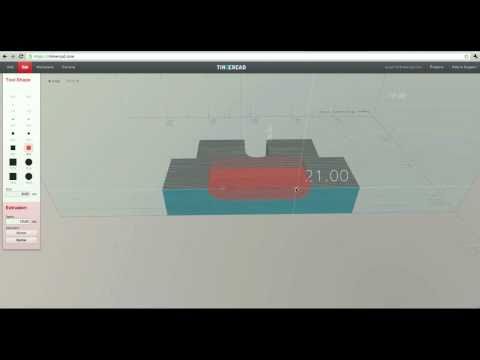 This free, web-based modeling program reinforces the thoughts of direct modeling becoming the predominate means of modeling in the near future. Even more, we’re seeing a design process being delivered in away that creates a faster transition to a manufacturing process. This is it. This is where we’re going.

Workflow Slammin', Render Bammin' modo for SolidWorks Kit is ON