Talk to People, Peel Skin from Bodies, with TeleHuman and BodiPod.

Telecommunications! It’s the oldest/newest thing – all the cool kids are doing it – tapping via telegraph, talking via the telephone, even video chatting via Skype – FUN TIMES. But, what about carrying on a conversation with a 3D representation of your pal? Holograms… whatever, it has all been done – we’ve all seen Snoop Dogg sharing the stage with a holographic Tupac. *yawn* But when a cheap, 3D beaming alternative comes about, look out, you may be the holograph.

At Queen’s University in Kingston, Ontario, The Human Media Lab has developed a rather simple holographic interface using six Microsoft Kinects and a few off-the-shelf projectors placed inside a tube. It’s called the TeleHuman. Each Kinect outside the TeleHuman tracks your posture and (I assume) your eyes to alter the projected image and display the illusion that your friend is speaking to you from inside a plastic tube. Truly, the people at the “Human Media Lab” are a cruel bunch. 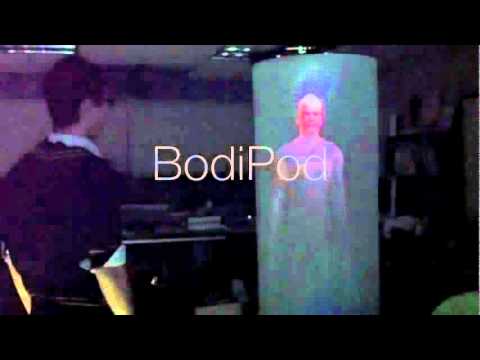 Not only that, they’ve also used the same concept to develop a program called ‘BodiPod’ that allows you to interact with a 3D anatomical model of a human being, peeling off the various layers of skin and organs with your hands – Yes, if you thought Canadians were a polite and courteous people, averse to visual grotesqueness – you thought wrong. They’ve managed to develop a way to rip up a human body without getting any blood on oneself. At least they aren’t resurrecting dead rappers.

What’s really special about this solution is that it doesn’t require a high-speed rotating mirror like this Teleconferencing display nor a limited perspective (á la Holographic Tupac – just transparent mylar and a projector directly facing an audience). Plus, it’s made from off-the-shelf components – you could make one of these. However, it would only be useful as long as your buddies have the life-size cylindrical pods as well. Until then, calling 911, Star Wars style, will have to wait.

Here is other holographic tech being developed by the Human Media Lab, which includes a sphere-shaped holographic system and wearable video-screens (for playing an amped-up version of tag, no less.) 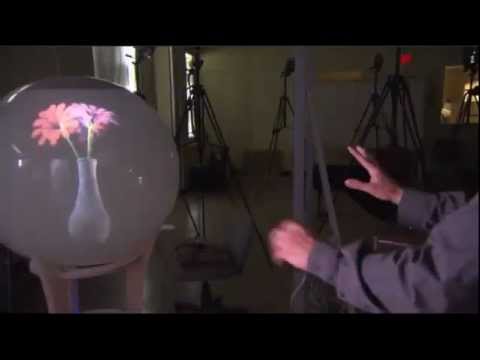