It’s late at night, I’m drinking stale coffee and as I file this report, New Matter’s MOD-t 3D Printer has crossed the three hundred thousand-dollar mark and is 80% funded. It’s been up on IndieGoGo for less than 24-hours where the early-bird specials sold out within the first two hours, and every other pledge is just swelling. In every possible way, the MOD-t is screwing Makerbot’s (and others) happiness, and how! 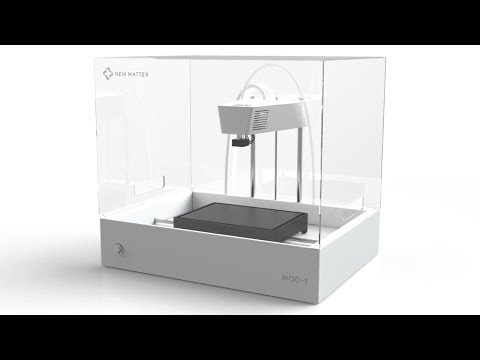 Question – is it fair to compare this new tyke with the old players? Answer – YES!! Oh well, the obvious points glare in our face like a sore thumb. A hundred and freaking forty-nine dollars for a 3D Printer with a 0.5 kg spool of filament; stack that up against a fancy dinner or 3 orders of the most expensive Starbucks drink and you know what I mean. Technically you need to add shipping charges, but I am going to ignore that and move ahead to the next point.

Frog Design – two magic words that make all the difference. Traditionally, 3D Printers are known to have a bulky and awkward form. Complete focus has been on functionality and not the design language of the printer itself. In comes Frog Design and you know this Apple conduit has all the expertise to bring in elements of style and sexiness. The end result is a printer that balances form and function.

Even if you have missed the early bird bus, the $199 price point is a STEAL! Upping the ante on pricing has in fact open the doors to a segment of society that may have previously not been so enthusiastic about 3D Printing. Now you can expect 3D printed Birthday cards from your grandma, just be sure the accompanying money is not printed, but the real greens!

Another cool point that differentiates New Matter’s offering from many others is the Thingiverse-like platform. Being an open-source for design ideas, the makers are giving enthusiasts and professionals a chance to make a quick buck. New Matter will allow you to upload and sell your creations at a price that you set. In many ways you can call this aspect the love child of Thingiverse and Shapeways!

MOD-t also scores high on simplicity; the fairly unique and intuitive software interface looks to be easier for new users to use than MakerWare. Frog Design is also involved in building a suite of companion apps, so can expect the simplicity flow in there too. Being Wi-Fi enabled helps, since something like the MakerBot Replicator Mini lacks the feature. The comparison chart provided by New Matter spells it all out for us. Speed wise, the MOD-t prints at 80mm per seconds, placing it in the middle position, which is a good start. It matches up to MakerBot’s Replicator Mini and 3D System’s Cube in terms of printing from a spool of biodegradable PLA.

If nothing else, the MOD-t scores the gold for being an impulse buy! I should probably skip my dinner date and get one!

Behind the Design: The bnd/one Flexible and Portable Guitar Stand