Back in 2016, Nintendo released the NES Classic Edition – a miniaturized version of their 1985 Nintendo Entertainment System (called the Famicom in Japan). The console came preinstalled with 30 of the console’s best games. With titles like Super Mario Bros., The Legend of Zelda: A Link To The Past, and Super Metroid included in the platform, you’d be hard-pressed to find a classic game you didn’t like on the NES Classic.

Sadly, the preinstalled nature of the console meant you couldn’t slot in your retro game cartridges as you did with the original console. Granted, it is harder to obtain original NES games than their digital counterparts, but if you wanted to play some obscure indie games, chances are the NES Classic wouldn’t have them. 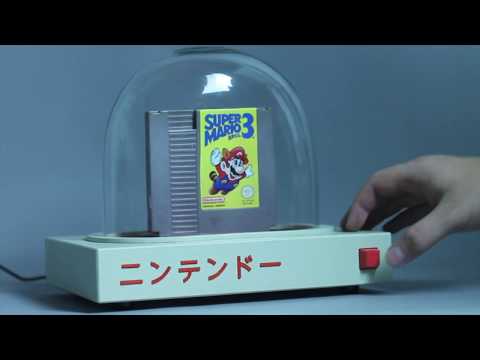 Enter the Pyua – a completely playable Nintendo shrine that allows you to play your old cartridges on a working console. Created by designer Love Hultén, the Pyua is a retro tribute to the console that pretty much saved the video game industry back in the day.

At the center of the platform is retro company Analogue’s own Nt mini, a fully compatible console which can play classic NES cartridges up to 1080p HDMI and RGB, complete with wireless controllers and wired peripheral support. Unlike the NES Classic Edition, the Nt mini can also play both Famicom and NES cartridges (which come in two different shapes).

Surrounding the console is Love Hultén’s retro-designed shrine itself. It has a glass case covering two slots where you can connect an NES or Famicom cartridge, while the console has been redesigned with a sleeker look (the Japanese kanji in front reads “Nintendo”). Pressing the big red button turns on an illuminating light, while all of the console’s slots and ports can be found at the back.

To store the cartridges and controllers when not in use, Hultén made a case which satisfyingly clicks and pops out your games and controllers like the snazziest catalog you ever saw. The case can be connected to the shrine to give it more elevation.

Find more of Love Hultén’s impressive game console redesigns over on his webpage.

KODAK 3D Printer Back On Track With 4 Unique Features