LEGO Robot Does Your Bidding Via Leap Motion Control Device

Can you make a robot do your bidding by the mere movement of your hands? The answer is yes. Can you make a robot use a motion controller to control itself? While your brain capillaries burst considering that, check out the nifty integration between the Leap Motion Controller and LEGO Mindstorm EV3 posted by the team at Leap Motion. German Vargas from the Math Department of the College of Coastal Georgia programmed it, linked it and strapped a laptop to his belly while walking around campus, shocking people as he controlled the bot by waving his hand about.

While Dr. Vargas originally considered using an Arduino, he discovered that the MonoBrick Communication Libraries let him integrate everything into a single project – receiving data from the Leap Motion SDK and sending it immediately to the EV3 motors, all within C#.

FINALLY, a project that doesn’t use Arduino. Even better, you can download the Visual Studio 2013 project from his website, with full source code and linked libraries. The integration source code is also available here.

If you have a robot, especially any of the hexapod variety, integrated with a Leap motion controller, we want to see it. Send it into tips@www.solidsmack.com. Here’s German and his wonderful motion controlled LEGO bot. 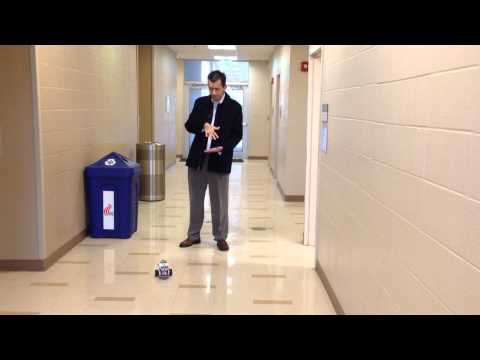