Since its first release, Duet Pro has been a fantastic utility for macOS and Windows users looking to add additional responsive displays using their various iDevices—particularly the iPad.

Last year, the app introduced new features that helped turn the iPad Pro into a makeshift Wacom tablet for iPad Pro + Pencil owners. With a recent update, those who have been using the iPad Pro utility will find even more power with the addition of new features for Duet Pro 2.0.

Among others, these include a Customized Pressure Curve for creating a more natural and personal sketching experience, Advanced Gestures for creating custom hotkey combinations or shortcuts, optional Line Lead for previewing where the Pencil tip is moving in an effort to speed up the sketching process, and improved color quality and Touch Bar support for those using the iPad Pro in tandem with a Macbook Pro.

If you already own an iPad and want to get more functionality out of it, Duet Display costs just $20—significantly cheaper than a second display. For those looking to get further Wacom-like functionality out of their iPad Pro, Duet Pro 2.0 costs an additional $20 after a one-week free trial.

While many professionals still swear by their Wacom tablets, the iPad Pro + Duet Pro combo isn’t a bad route to take if you’re already using the iPad consistently in meetings or for other tasks. Find out more here.

While we’re on the topic, let’s not forget about Unbox Therapy’s “Triple Monitor Freak Show” using two iPads and a MacBook Pro to create an on-the-go triple-monitor setup: 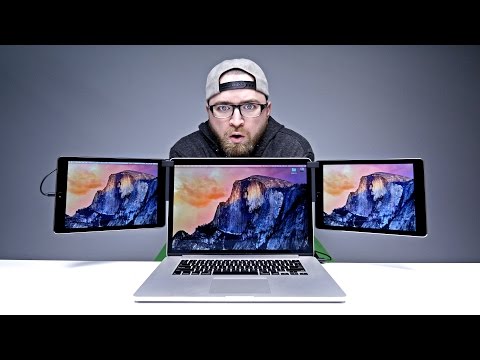 Watch a Master Jeweler Use a Lathe Like a Spirograph