This Compass Design Sketches Your Digital Files Onto Paper

After years of humans figuring out ways of getting analog sketches into a digital platform, design engineer Ken Nakagaki is reversing that notion and wants us to put our digital sketches onto an analog ‘platform’ with his COMP*PASS design…which was recently shortlisted for a 2014 James Dyson Award.

Armed with the goal of drawing a square with a traditional compass design tool, Nakagaki developed an automated compass that, via a Bluetooth iPhone connection, can sketch out digital sketches onto an analog surface…whether circles and arcs or not.

The compass can also trace existing shapes from a paper sketch and then relay the data back to the iPhone for a new take on scanning your pencil or pen sketches on-the-go. Additionally, there is a “copy and paste” function that draws a shape that can be folded into a set dimensioned size…both in 2D and 3D: 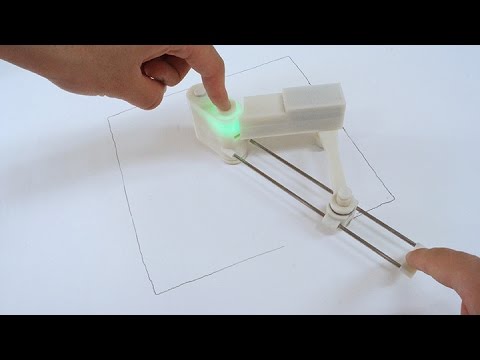 “COMP*PASS is a drawing tool that can draw various kinds of figures on physical papers,” says Nakagaki. “By regulating the radius of the pen, users can draw digital controlled figures only by twisting. Also, by referring ordinary compass’s function of “measuring distances,” COMP*PASS enables users to record and duplicate figures. The drawing supporting functions of CAD systems is released from displays to physical environment and integrated into a daily tool seamlessly.”

The prototype—which is made of 3D printed ABS resin—contains a rotary encoder, a servomotor, LEDs, a switch, a Bluetooth module and a microcontroller in order to perform the scans, measurements, and redraws.

After over a year of developing the product, Nakagaki plans on putting it into production for commercial use soon:

“We plan to commercialize this product as a daily stationery and propose various scenes using it such as daily fabrication, education or processional architectonics.”

Check out more over at the James Dyson Award site.