The Lenovo ThinkStation P500 sits there. Dark. Rigid. Ready to start the day. You sip your coffee. It hums every once in a while, letting you know when it’s cooling itself off. Ahhh. You give it a little pat, then look around to make sure no one saw you. The P500 is a desktop workstation much like any other, but Lenovo is dedicated to making it unlike any other. After using it, I have a better view of how they’re doing that. I also see red lines all over the place. Let’s discuss why.

Lenovo has been gnawing away at the foundation of the desktop workstation market like a mirthful mama beaver, gobbling another percentage point Q4 of 2014 to bring there overall take of the space to 13.6%.[1] They were at just 8% in Q4 of 2011. Their rise has been due to a mix of value and growth in foreign markets along with bringing in options the big OEM’s are now trying to keep up with. It has positioned them nicely as the largest PC maker in the world and second largest PC/tablet make in the world.

The ThinkStation P500 lives comfortably amidst Lenovo’s P-Series desktops, between the P300 and the P700/P900. These are their Professional Workstations made for designers, engineers and 3D professionals, so you can bet it comes equipped with the standard specs to make everything from modeling to media creation much more manageable with plenty of options to make your wallet muscles tighten. Price for the P500 starts at $1,669 (USD). I’m on a $3,037.95 (USD) system. Let’s take a look at what that gets you.

Design: The front face is set in, so less opportunity for that power button to be hit accidentally. Lenovo marks all the grip locations with bright Lenovo red, from the haul handles on the outside to the component removal access on the inside. You don’t think to much about it, until you start seeing red lines on everything you grab.

FLEX Trays: The ability to customize, update or replace components in the P-Series Workstations is phenomenal. Those red grip locations also mark the levers, latches and locks to unfasten, snap or slide components in and out of with no tools. It also makes it much easier to keep the dust out, which you’ll be doing more often than replacing power supplies and GPUs.

FLEX Bays: Adding components is simple as well. Their front-facing FLEX Bays allow addition of ultraslim optical disc drives (ODDs), I/O ports, 9-in-1 or 29-in-1 media card reader, eSATA or Firewire. The P500 (and P700) comes with two FLEX modules. The P900 comes with three. Storage up front would be great for accessibility and my first choice in additional modules.

Port locations: Glorious ports abound. 4 USB 3.0 ports, an SD Card slot and a headphone jack ON THE FRONT make for quick connection of your most used devices. One bonus would be an additional mic jack. There are plenty o’ ports on the back as well. Your audio and PS/2 connections, four additional USB 3.0 ports, and four USB 2.0 ports.

Cooling: Lenovo leads their P-series feature list with this one–Pantented Tri-channel Cooling. It makes sense that they’re proud of it. It reduces cooling fans (noise) and directs air where it’s needed through the front honeycomb grill and through a set of baffles. In regular operation the hum is minimal and the reduction in heat is physically noticeable.

This video provides a great overview of the highlights above. Pay attention when they pop open the side and hyperlapse dismantle the components. 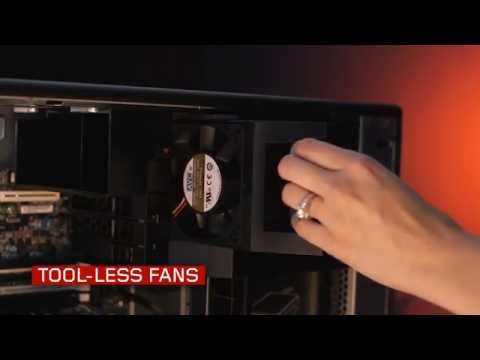 As far as dream machines go for me, this is very close. It’s hard to think there’s much difference from desktop workstation to desktop workstation, but Lenovo is showing where little things matter. It’s most evident in the design features that double-up for practical use, features like their front-facing FLEX bays for adding components, plentiful port access and those red lines that burn themselves in your memory.

This is the first desktop that I’ve had more port options on the front. Highly useful. The machine is cool running and (mostly) noise free. Surprisingly, the one downside I experienced is the high hum of the fan, especially when you start pushing the CPU. However, you may notice it less if your tower is tucked away, unlike mine where it sits up on the desktop.

On the system side, the Haswell Xeon E5 CPU is pure power and reminds you what joy there can be in upgrading your computer system. I opted for a single SSD this go around–my first actually– and it’s just the computer experience you want with faster boot and snappy file transfer. At $350, it’s a big chunk of the PC pie, and with a mere 256GB you’ll want to throw on another terabyte or two of a plain ol’ 7200rpm HD.

At just over $3k, this system is a little over my typical budget of $2500, but reigning that in while still getting the performance you want is certainly doable. Overall, the ThinkStation P500 is a great mid-range workstation, speedy with the SSD options, pushed with the more CPU intensive tasks, yet able to keep up wonderfully with all the various task throughout the day.