I love new types of Human Machine Interfaces (HMIs). When it comes to demonstrating design projects, you typically need both hands – unless you’re a badass who can fold origami cranes with one hand like it’s nothing. Now imagine trying to capture images while simultaneously working on a dual-wielding project. Yeah, it’s not that easy, and that’s under the assumption that the shot will not already be distorted or blurry.

To free up his hands for capturing more compelling video shots, design engineer Jude Pullen – yes, he of Design Modelling fame – designed a cheap but effective system that allows him to use both hands without the need for world class juggling skills to take effective video shots. Thankfully, for those of us who want to follow suit, building our own pedals is a relatively cheap process that uses simple USB foot switches modified to work with a DSLR camera.

If you’re a modder or a maker, Jude’s build is pretty straightforward, and chances are you already have the tools on hand. His platform is designed around a pair of USB foot switches that are modded with one for auto-focus and the other for snapping the shutter. A pair of switches are wired to a handheld remote (normally used with a camera for taking pics), which has the switch cut off and the wires connected to each footswitch with the2.5mm jack left intact at the opposite end.

For those that prefer to use a one-foot pedal, the design can be modified to use one switch, which incorporates two pressure tabs on a single switch; one is bent to a greater angle with each triggering the switch depending on the amount of pressure.

Regardless of which route you prefer, the bottom line is that Jude designed a simple solution that makes it easier to take pics while having both hands in the shot- making it a perfect solution for photographers in any situation. 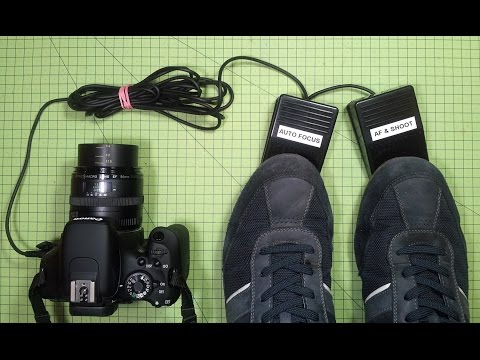 On a personal side note, I have a few of those foot pedals under my desk right now – doing absolutely nothing. I often fantasize about mapping a foot pedal to various controls in Battlefield 4 and imagining player mouths gaping when they think “how is he hitting so many keys at once?”

Read the step-by-step tutorial over at MAKE.

Behind the Design: The Making of a Nordic Bow and Arrow