Jupiter Ascending by the Wachowski siblings opened this weekend. After seeing the original trailer, I was struck by the hovering, glowing cool factor of the boots for “Caine” (played by Channing Tatum). Hmmm, LEDs on the bottom of the sole. And there lying in the corner of my shop, an old pair of my boots. It went boots, Tatum, boots, Tatum, boots, Tatum, boots… for a while, until I realized… dur… I can make THAT!

The easiest way was to handle this project was to call upon one of my older projects, The Starlight Paintball. In that project, I took the LED Throwie idea, and put them inside paintballs. Measuring the sole of my boots, the thinnest section I had to work with was 0.6 inches–almost exactly the size of your standard paintball at 0.68 inches in diameter.

Caine flying through the street in his boots with Jupiter on his back from the Jupiter Ascending trailer. This is the lighting effect I set out to make.

It occurred to me, this is my first attempt at cosplay, in a way. But for the record, authentic accuracy is not central to my build. Instead, I wanted to get the lighting effect on shoes that could you could wear everyday. As many said while I was building this project, “Oh, it’s like how little kids have lights in their shoes.” I replied, “No way punk, these are on the BOTTOM, subtle!” 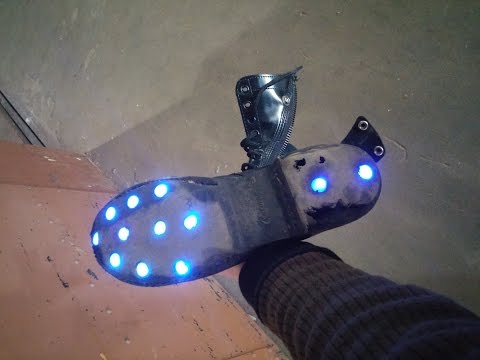 See! Let me show you how to make your own!

How to Make Jupiter Ascending – Caine’s light up boots:

Take your boots and locate where you want to place the lights. (For this, I tried to copy the layout of Caine’s lights from Jupiter Ascending.)

I drilled a pilot hole of 1/4″ at each spot, then followed with a 1/2″ drill bit. Drilling the pilot hole prevents the larger drill bit from “walking” (when the drill bit moves away from the desired spot across the surface of the material).

These Corcoran Side Zip boots were ideal for this project, since the sole was flat and smooth. I bought those originally, since they last longer than one with a waffle.

All holes drilled. Take a look at the heels. The rubber was far too damaged to get the four side lights on each. A shame I was not 100% accurate.

Cut the Polycarbonate discs on your lathe. I made a variety of thicknesses, figuring different holes would require pieces of different thickness and the boot sole is so old the rubber was deteriorating. Drilling them didn’t help the integrity. 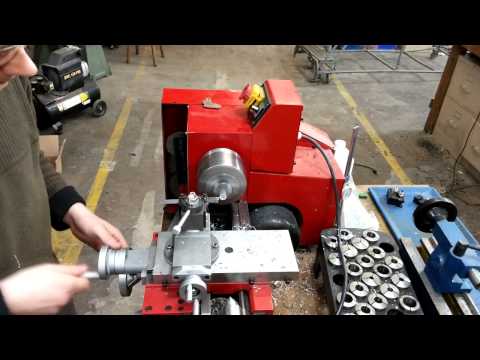 This is very much like the old Starlight Paintball project, except for one step. The LED needs to be positioned on top of one side of the battery. The 3mm LEDs I selected have the best vertical light output. There are others types with a broader light spread, but I didn’t want to wait a month to get them. The LEDs assembly is as follows:

Place LED on battery. I bend leads so there is more area of electrical contact.

Cut pieces of heat shrink tube for each LED

I placed tape on one LED lead so it would not make contact with two sides of the battery when I bend it vertical. Bend LED to the top of battery and point upward. Admire! These are ready to be added to the shoe.

The easy part. Stuff the LEDs inside the 1/2″ holes you drilled in the boot, then place the plastic plugs over the LEDs.

Placing the polycarbonate disc over the LED straightens out the fugly.