In this interview, we chatted with one of the leading LED illumination experts in the world, Julius Muschaweck. If you want to know how to super-precisely measure and model LEDs for illumination, this is the guy to talk to. The former “Osram grandpa” worked as a go-to LED expert within Osram and now works as a free agent. 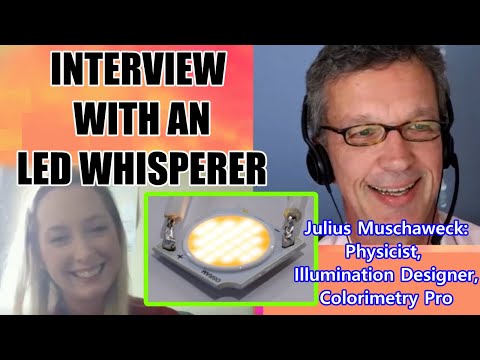 Other hats Muschaweck wore include researcher of early solar technologies and an engineer of a multitude of illumination system solutions. Today, as a freelancer and owner of a sole proprietorship, JMO GmbH, Julius does consulting on illumination design projects and teaches.

Muschaweck told me he considers himself a physicist first, which in turn means he’s forever a “curious kid.” His earlier curiosities involved energy and solar collectors as a scientist, which sucked him into optical engineering.

One of those first projects was developing stationary, high-temperature solar concentrators that would sit on a rooftop. Using a combination of vacuum tubes, selective absorptive coatings, and mirrors, he was able to generate heat concentrations measuring up to 180 degrees Celsius/350 Fahrenheit at 50% efficiency.

So, Julius could basically cook brownies with the sun if he wanted to. This was the point in the interview that I realized if an apocalyptic scenario ever occurs, I want to be in whichever surviving tribe Julius is in.

From that work, Roland Winston, the founder of non-imaging optics, heard of Muschaweck and brought him over to Chicago to do more solar research. They were successful from a scientific perspective, engineering a high-temperature, world-record-setting solar collector. However, the market wasn’t ready for this solar tech, so Julius moved on.

Illumination Simulations Before They Were a Thing

Next, Julius and some colleagues of his banded together to do work in illumination. They basically took their knowledge of solar collector optical design and reversed it. They were doing this design work at a time when almost no one was doing it. By luck and unbeknownst to them, the LED revolution was about to kick off, so they were in the right place at the right time.

LED technologies were very inefficient initially, so highly efficient optics were needed, because as Julius says, “the photons were so precious that you would basically hand-carry them to the target.”

After turning himself into an illumination design expert, Julius felt a yearning to be more closely involved with product development. He wanted to work for a company that made something instead of handing off a design as a freelancer and never hearing back about when it was built. That’s why he jumped into Osram, one of the large LED manufacturers, making things by the billions.

One of the big differences between working at Osram and as a freelancer is as a freelancer, you have to wear all the hats simultaneously. In large companies, you can find those who are there as specialized experts, which is the role Julius filled. He called himself the “department Grandpa” when he joined at the age of 45.

Muschaweck got to work on pioneering projects like bringing LEDs to displays for the first time. He spent a lot of time flying to Japan to work with SONY to develop the first big RGB direct backlight television. The quality of that product is still outstanding even compared to today’s standards.

How to Build a Thriving, Collaborative Technical Community

Besides his technical accomplishments at Osram, he also built a global community of illumination engineers within the company. He was able to help create an environment where these 100-or-so pros scattered around the planet interacted and helped each other.

As someone who worked in both illumination design and building structures that allow collaboration for technical pros, I find this achievement even more amazing!

Muschaweck says there are 3 main ingredients needed to build a successful engineering community.

He was so successful at building this interactive community that he felt he wasn’t needed at Osram anymore! Then, it was time again to jump into a new environment.

After Osram, Muschaweck moved to ARRI to help them with a totally new product line. The company built imaging sensors that could create award-winning skin tones in cinema, and they wondered how they could diversify their market. The answer was in medical devices.

ARRI went to work developing the first fully digital stereo microscope for surgery, and they needed an illumination component for it. So, Muschaweck designed the illumination part. To do that well, he needed to sit in on many live surgeries to see how the work was done.

(I am so thankful I developed high beams for trucks instead.)

There is one big advantage to using a fully digital microscope system for surgery; you can play with radiometric reflectance and absorption instead of photometric. That means things that wouldn’t stand out to a human eye can be made to stand out with a camera sensor’s eye. You can actually highlight certain anatomical structures that would otherwise blend. This, in turn, widens the possible applications for how the digital microscope can be used in medicine.

The term “colorimetry” is often misinterpreted when visitors see it on OddEngineer.com. They might be working on a spectroscopy project, which depends on colors or wavelengths of light, and thinks Muschaweck, as a colorimetry pro, is the person they need guidance from. While he can help a company design a light source to emit the right color for a spectroscopy project, colorimetry is NOT spectroscopy. In fact, there are experts on Odd Engineer who specifically advise on this different field of spectrometer development.

When I asked Muschaweck to define colorimetry for confused people, he said it’s about precisely measuring different wavelengths quantitatively and getting colors to look like they should.

If, for example, you were designing an illumination system combined with an imaging sensor for a medical device, colorimetry becomes extremely important. You can make sure 2 different anatomical things will look different through a display or under an illumination system with colorimetry. If your color display instead isn’t accurate, a surgeon might not be able to differentiate between things like nerve versus sinew.

Colorimetry is also important in general interior lighting. One issue that can crop up with bad color in this kind of illumination is metamerism – when your navy blue and black sock look the same until you step out into the light of day and look down in shame. Another issue, Muschaweck tells us, is that lousy color in your interior lighting can make things look ugly – skin tones can look sickly and zombie-like, and your tomatoes may look rotten!

At the same time, if you go to pick up a replacement light bulb for your home, and you want to pick something with good color, you need to decipher an array of obscure terms. You’ll see words like Color Rendering Index (CRI) and the color temperature in Kelvin of a radiating black body (kind of a description of the color of flames of different temperatures). Muschaweck thinks the industry needs to get better at communicating color simply to consumers, and I agree!

When incorporating illumination into a product, Muschaweck says often; people don’t look outside their silo. They may be hyper-focused on thermal management, marketing, project management, or mechanical engineering, which can prevent individuals from seeing the best design solution. What’s most often needed is a holistic view. Illumination systems work in just that: systems!

Muschaweck tells us there may be parameters you can nail down to make an illumination design work, but you can improve an entire device with a system-level understanding. For example, if a system needed active cooling because of how hard you have to drive your electronics while using them with cheap optics, you might be able to optimize those optics (lenses and reflectors) for efficiency. That may make the optics more expensive to manufacture, but if you improve efficiency enough, you might be able to remove that expensive active cooling requirement. You’d then reduce the overall cost of the system.

To prevent these kinds of mistakes, Julius advises all stakeholders to come together at the beginning of a design and then work hard to understand each other’s pains.

Muschaweck sees the 2nd biggest mistake is that teams won’t seek out the limits of what is possible at the beginning. Feasibility studies are important but vital is an understanding of how close you are to bumping into those pesky laws-of-physics limitations. If something is barely possible in theory, it may be impossible to manufacture in reality.

Take a Class From Julius!

I was fortunate to drop into one of Muschaweck’s illumination courses and was surprised at how hard he works to make the content relatable with palpable and relatable examples. He diligently keeps the format open and engaging, too, instead of dry. I highly recommend them!

You can find the courses hosted by Synopsys, which Julius teaches here. And other courses in the future may be linked to on his company’s website on this page.

Want guidance for your project from Julius Muschaweck? Book Him on OddEngineer.com!

If you’d like Julius Muschaweck to give you illumination design guidance for your application, you can directly book an appointment with him on Odd Engineer at this link.

There’s no need to ask him about his availability! Just click the “Schedule Appointment“ button, and book and pay for whatever available time and day works for you. If you need him to sign an NDA for your meeting, you can upload a signed copy when you book. You’ll then receive an email with a Zoom meeting link.

Full Interview with Julius Muschaweck on the Odd Engineer Podcast

Want to hear the long, unabbreviated version of this interview? Check out Episode 3 of Odd Engineer’s podcast for advice and more details on colorimetry, LED illumination design, and career advice on how to be at the right place at the right time.