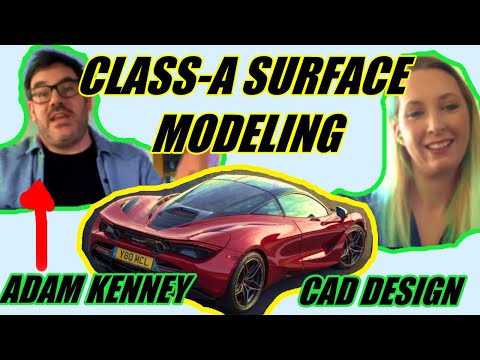 What Exactly IS Class-A Surfacing?

Adam tells us he is often mistaken for the industrial designer who creates basic, initial CAD forms. That’s not what he does with Class-A surfacing, however!

If we use a real-world analogy of, say, constructing a wooden canoe, Adam would not be bending planks of lumber to build the canoe. Instead, his job is to come in with the finest grit sandpaper imaginable and smooth the hull out to perfection.

Class-A surfacing involves minute corrections to CAD forms at the end of the design process. These perfect both the look and feel of a product.

So, how did Adam get his first gig? Did he get a degree in mechanical engineering, and work for decades doing CAD work within automotive slowly getting promoted to hallowed class-A work?

Nope, Adam’s very first gig in automotive was for class-A surfacing. Before that role, Adam played around with several different careers and academic paths.

In college, he first studied computer programming, hoping to find a way into video game design. A lot of that work Adam found boring, because it didn’t relate to game design at all, so he quit. For a while after, he worked in various jobs and fields of study including construction and leasing cars. However, in between, he often taught himself new design programs and began building a portfolio of digital designs.

Who You Know, Not What You Know

Eventually, Adam Kenney’s brother convinced him to try to get into the automotive design industry. Adam’s brother was already in the field and saw a growing need for designers. His brother helped open a door for him to get noticed, but the hard work he put into his portfolio is what got him the first gig.

A leader at one of these companies saw Adam’s talent and self-motivation and offered him a low-paying job. There, he earned one of the biggest boons to getting hired in automotive: first-hand experience.

After that first job, which ended abruptly, Adam was a contractor working as-needed on specific projects. One project took him to Austria (Mahlzeit!), which was a bittersweet experience. On the one hand, Adam was immersed in a new culture and his daily grind involved awesome new sights, sounds, and cuisine. On the other hand, he had a family back in the United Kingdom and continually needed to bounce between countries during the contract.

Adam tells us that as a contractor, you never know when a project you’re in the middle of working on might get canceled. Even daily tasks, where he might be in charge of one small section of a car body, could change at a moment’s notice. It’s all in the nature of the work! The upside of this includes getting to have a hand in creating some of the most gorgeous race cars made.

The Tools of This Trade

As the “conduit” between automotive designers and automotive CAD engineers, Adam needs to speak a couple of different technical languages.

On one side, when working with engineers, he might need to import a model into CATIA. Adam isn’t a fluent designer in this program, but he needed to gain enough proficiency to inspect the CAD an engineer discussed in the same native environment. This is necessary to prevent communication mishaps.

On the other side of his role, Adam Kenney will also sometimes take a napkin sketch from a designer and turn that into a new slope of a feature. Ultimately, he takes communications made in other tools and does most of his magic in ICEM Surf.

How is Class-A Surfacing Work Done?

The reason why there needs to be a different software for class-A surfacing work compared to traditional CAD design is that it’s done in a totally different way! In his role, Adam would not apply 1 standard fillet function to multiple edges or work with solids to manipulate CAD. Instead, Adam plays with teeny, tiny, individual control points much of the time. It’s common to make adjustments on the scale of a fraction of a millimeter.

One of the tools to do this work highlights surfaces. It works similarly to if you took a shiny bit of fender and tilted it in direct sunlight to see if there were any dings in it. The software can make any “breaks” in the lines of a car body stand out with this highlighting.

Then, when those discontinuities show up, Adam goes to work painstakingly adjusting control points. Each point can affect the next in a line like dominos, and sometimes he can work on the same spot for days or even weeks before the seamless curves are finished.

Other Applications of Automotive Surfacing Skills

Adam still has a deep love for video game design and other digital art, and luckily all that intimate experience with automotive CAD translates. Recently, he was able to advise video game designers and digital ad creators on tricks from his world to make their cars look more realistic. In the end, different types of digital renderings have a lot of similarities!

His eye for digital detail can translate to other uses, too. In consumer products, he can help CAD modelers think through design concepts before prototyping. Is that cord in a smart spot? Can that molding line be moved to an area where it won’t scrape the user’s hand?

If a consumer electronics design is already mostly completed, he can use the same methods from automotive to make a product look and feel like it’s higher quality. Adam can suggest tweaks before a team moves to a hard mold to polish that housing design with the finest-grit of digital sandpaper.

Want Guidance from Adam Kenney? Book Him on OddEngineer.com!

If you’d like Adam Kenney to give you class-A-surface-level guidance, you can directly book an appointment with him on Odd Engineer at this link.

There’s no need to ask him about his availability! Just click the “Schedule Appointment“ button, and book and pay for whatever available time and day works for you. If you need him to sign an NDA for your meeting, you can upload a signed copy when you book. You’ll then receive an email with a Zoom meeting link.

Then, just make sure you bring all your questions, CAD, and data to the video conference!

Full Interview with Adam Kenney on the Odd Engineer Podcast

Want to hear the long, unabbreviated version of this interview? Check out Odd Engineer’s podcast for advice and more details on Adam’s journey to becoming a class-A surface modeler of race cars.