It wasn’t until the storm began that we saw just how many joints the spider titan had. Socket upon socket, torn rubber stretching it’s wiry tendons between. Fifty bends and deftly drawing its way up the chasm wall, and strapped to its back, a hundred of its babies suckling on these links.

Yaroslav Kotsubinskiy – Hardly a handful of work, but couldn’t resist sharing these mech and droid sketches, a few ships and a wonderful robot ‘kitten’.

Nintendo Labo – Nintendo announced the next-generation of gaming and making. This looks like all kinds of fun and all kinds of cardboard.

To the side – What’s going on to the side of album covers? Russian artist Igor Lipchanskiy works up his best scenarios in our Instagram follow of the week.
.
Blade Runner 2049 Making Of – Process footage from BUF breaking down how they created the hologram scenes in the Ridley Scott remake.

Rival Minigun – The nerf gun mod to beat all nerf gun mods. Captain Xavier explains how he made it.

The Horse Trotted Another Couple Of Metres, Then It Stopped – I think that is pretty self-explanatory. Katharina Grosse’s latest sheety, yet colorful installation.


Seven Sticks of Dynomite – Awolnation’s new vid out on Red Bull Records for their new album out Feb 2, 2018, directed by Riley Harper and Aaron Bruno and shot in Malibu, California. 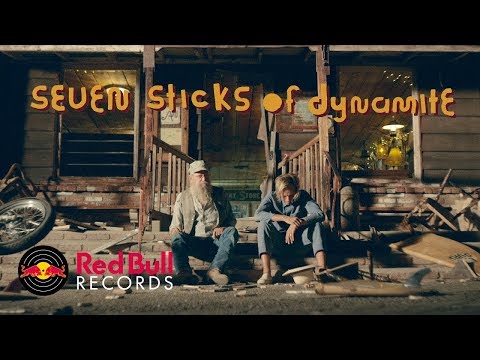