Yes, Mix Pool Chlorine and Brake Fluid For a Plume of Fire

The unspoken law of the universe dictates that if an activity is dangerous, someone will try it. Human nature, right? When someone puts boundaries on what you can or cannot do, curiosity says, “question that, fool!” From ‘Do not feed the animals’ to igniting hairspray with a lighter, nothing is too frightening (or too outlandish) to defy.

Grant Thompson, better known as “The King of Random”, conducts weekly experiments on his YouTube channel that do the exact opposite of the warnings on the back of the box. With a passion for science and blowing things up, Grant manages to create content that is informative, forehead slapping and absolutely entertaining.

As usual, Grant picks a random request from the comments section of his past YouTube videos and turns it into a 5-10 minute feature. In this particular video, he explores the reaction made by mixing everyday pool chlorine with car brake fluid. 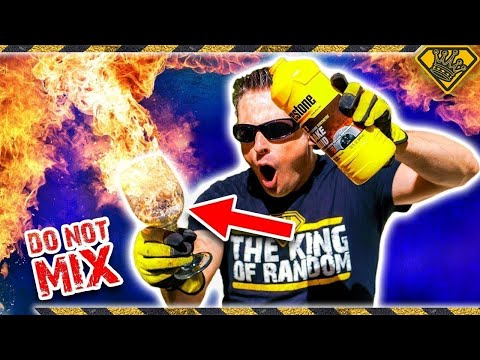 To start, Grant buys a 73% concentrate of pool chlorine and some DOT 3 brake fluid. The fluid contains a mix of glycol ethers which, when combined with calcium hypochlorite (or chlorine), can lead to some interesting results.

That’s what I’m talking about. After filling the bottom of a glass with half an inch of chlorine, he mixes it with the brake fluid. While there seems to be nothing going on for the first minute or so, the mixture suddenly combusts with an audible “POP!” and sends a pillar of flame sky high. Good for celebrating the Fourth of July, a birthday, a new haircut or your cat getting rid of that hairball.

Upon closer inspection, Grant explains the glycol ethers present in the brake fluid are flammable but are separated by oxygen molecules, making them harder to ignite and safe to use on your brakes.

This changes once the fluid is mixed with chlorine. By breaking down the glycol ethers into smaller aldehydes, they start to react with the oxygen and the pool chlorine and combust due to the heat produced. It takes some time for the ethers to break down (which explains the lack of an immediate flame), but soon the area is set ablaze and littered with bits of solidified brake fluid ash.

Whereas some people would be fumbling for a fire extinguisher, Grant instead devises two more experiments: one mixture of chlorine and brake fluid in open air, and another in a plastic bottle.

After throwing caution to the wind and mixing the volatile components with his finger, the mixture goes up in flame at a faster time of 54 seconds. Grant fails to explain this, but the abundance of oxygen in the air could possibly be the cause of this preemptive combustion.

But this pales in comparison to the mixture in the plastic bottle. Though it takes the same amount of time as the glass experiment, the flame that sprouts out from the nozzle is far more violent and rockets up to roof height. Most likely due to the small opening, the flame becomes more concentrated and ends up melting its container.

These components may be common, but the reaction they produce is just out of this world! Even though Grant does this at home, you should definitely take the necessary precaution and, yeah, have a few fire extinguishers nearby. While I don’t condone any act that leads to bodily harm, you can find Grant Thompson’s project PDFs, as well as more of his videos, over on his webpage.