Despite the onslaught of VR 3D modeling apps, there aren’t a lot of ways to use a tablet and a spoon-like device to make the process more awkward. Fortunately, Kickstarter has brought us one. 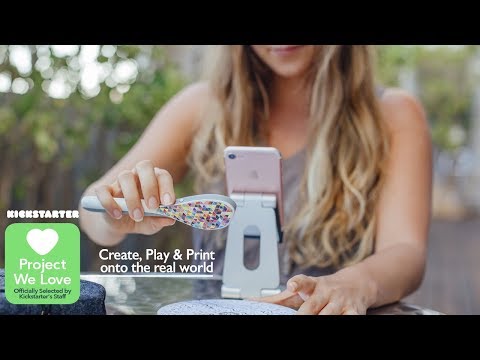 The Yeehaw Wand might look like any ol’ spoon of colorful mosaic tiles, but it’s actually an electronic sculpting paddle that sucks the ideas from your brain with the flick of a wrist.

How does it work? Well, you download the Yeehaw 3D modeling app onto your phone or tablet, then use the Bluetooth-enabled yogurt spoon to craft your designs IN REAL TIME. The app utilizes the mobile device’s camera to recognizes that odd motion you’re making is suppose to be a squirrel jumping out of a wheel-barrow. Unfortunately, there’s no AI here, so instead you get a rock-blob vomiting a stick with eyes – hours of fun. But don’t dismay, you can 3D print it and sell it for thousands as modern art.

After you synchronize the wand with a mobile device, the Yeehaw app interface’s head up AR display shows you exactly what’s going on. It comes with features like mirror, edit, stamp, and allows you to draw/extrude different shapes. And, as with other 3D geometry apps, you can rotate, pan and zoom the model.

While it seems a bit of a joke for those of us modeling complex geometry every day, there’s actually some interesting spatial recognition going on here. Though a bit awkward to think of modeling with a tablet between you and the workspace (with what looks like a unicorn suppository), think of this type of 3D modeling interaction through glasses or contacts – we’re not too far away from that folks. With that in mind, there’s an interesting part this kind of tech can play.

The app runs an OpenGL 3D engine and will be available for Android and iOS devices (provided they are or succeed the iPad Gen 3 or iPhone 4). As for file formats, Yeehaw Wand supports STL, OBJ and MTL files for color printing. 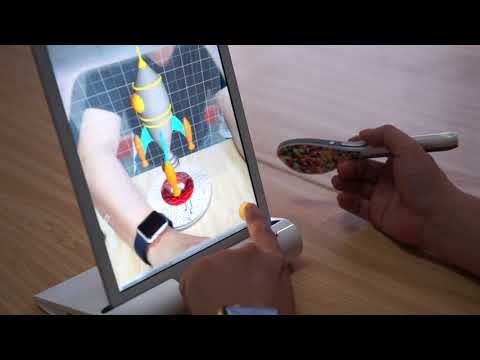 Aside from odd models of (what we think is) Rick and Morty, you can use the Yeehaw wand to create more practical 3D designs like rocket ships, low-poly animal like things and symetrical stuff. The company has collaborated with Sketchfab using their AR technology to allow you to place the model in your environment.

You can purchase one for $99 or a two-pack for $179, plus they have a $399 option that comes with the wand and a Yeehaw 3D Printer – a small delta printer that was funded last year. You can learn more about the spectacular spoony Yeehaw Wand on Kickstarter or at us.yeehaw3d.com.