While most of us enjoy the simple acts of assembling LEGOs into typical structures of buildings, robots, and vehicles, LEGO enthusiasts tinker with this stuff ‘illegally.’ Wait, what?! Well, you just read that right: You can do illegal things with a LEGO.

In this useful video by Jack from The JackHammer, even a LEGO novice can learn the difference between a sturdy LEGO connection and a questionable one: 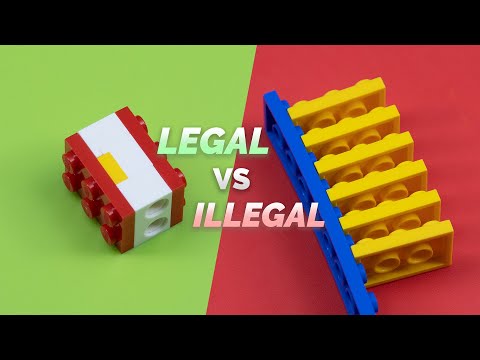 As it turns out, illegal LEGO building techniques can be classified as a connection between LEGO bricks which is too fragile or puts stress on any of the bricks in question. Though lots of LEGO builders online use a number of these illegal techniques, applying them to your builds can result in the warping or breaking of your bricks. And considering how expensive LEGOs are nowadays, you definitely don’t want this to happen.

One of the main reasons builders use these illegal techniques is convenience. Say, for instance, you want to connect bricks on both sides of a single LEGO brick. A lot of builders simply stick a LEGO Technic pin or a couple of cheese wedge parts in between two LEGO bricks, thereby allowing stud connections on both sides.

What you may not know is these techniques put a lot of stress on the LEGO Technic pin and/or the cheese wedges. Sure, you can build upwards or downwards this way, but the LEGO bricks you’re connecting might not actually be perfectly aligned since LEGO never intended for the bricks to be joined this way. Couple this with the fragility of the connecting parts and you could be looking at a bunch of snapped plastic in between your pieces.

So, instead of using this illegal technique, Jack recommends using a couple of Technic pieces and headlight bricks to completely fill out the space between the bricks you want to connect.

Not only is this technique completely legal (simply means it complies with LEGO’s official building rules), but it also completely fills out the space between the two bricks which evenly distributes the stress from both sides. It may take a few more pieces to make, but using this method ensures the stability of your build and more importantly, the integrity and longevity of your LEGO bricks.

Jack demonstrates a bunch of other illegal techniques in his video and gives useful legal alternatives. What’s interesting to know is that he mentions that LEGO builders who practice these illegal building techniques mostly use them for temporary builds – meaning they eventually break them down after a set amount of time.

If you have a ton of LEGO bricks lying around, you could give these illegal techniques a try, but if you’re looking to build something more permanent or are working with a set amount of bricks, then it might be best to steer clear.

Of course, these illegal building techniques are best applied to custom LEGO builds. You definitely do not want to try this on an official LEGO set where every piece has its place, lest you run out of pieces trying to make something as huge as the Roman Colosseum.

Jack has a ton of videos on The JackHammer YouTube channel where he mixes both official and custom LEGO sets on top of his LEGO tutorials. So, be sure to check him out for more LEGO goodness!