Traditional digital fabrication of 3D models relies on first completing the model, or a piece of it, sending it through the slicing software, generating the g-code, eating a sandwich, then printing it out piece-by-piece. Sometimes design changes are required based on printer output or maybe the model needs tweaked and the print needs to be redone. It’s a process that can save time in the end, but waste a lot of time in between.

But what if rapid prototyping the model could be done on-the-fly, as the model is being designed, in order to get a better understanding of how it will all come together?
That’s the idea behind Cornell graduate student Huaishu Peng’s On-the Fly 3D Print platform, which allows users to design digital models and produce them in near real-time by 3D printing a low-fidelity wire frame model of the design. 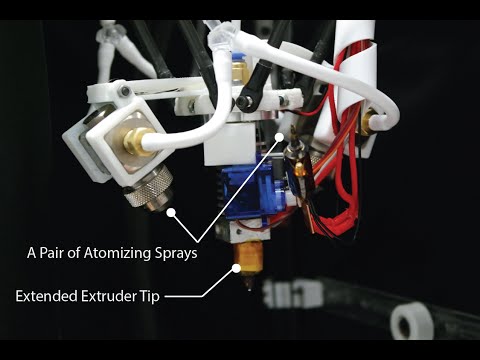 On the hardware side, Peng and his team started by modifying an off-the-shelf Mini Kossel delta 3D printer, equipping it with an extended extruder nozzle, a pair of atomizing cooler sprays and a retractable cutting blade. The team also incorporated additional motors and structure that give the platform 5 degrees-of-freedom (DOF), allowing it to yaw and pitch to provide more flexibility for building wire frame structures.

The new On-the-Fly 3D Printer with additional structure for 5 DOF, including pitch and yaw.

On the software side, the team developed their a plugin to Rhino, which features an ‘auto mode’, which does all of the heavy lifting- converting the model design to machine code, finds the optimum printing angle, collision avoidance and starts the print without the need for human input.

I had a chance to ask Peng a few questions about what prompted him and his team to develop the unique design for their On-the-Fly Print platform. “With the advance of digital fabrication tools, such as 3D printers, it is now very easy for the user to design and make sophisticated physical objects. But we feel the convenience of such tool also create a gap between the “design” process and the “make” process. For example, in a traditional crafting activity, people design and make at the same time (imagine making a clay vase), but now with digital fabrication, people can only design on-screen–it lacks the ability to touch/feel or get a sense of the scale of their design in the early design stage. And that’s how we come up with the On-the-Fly Print idea.”

As to what the future holds for Peng and his team regarding the advancement in 3D printing technology he states, “We would like to create a system to print fast physical representation for the user, so that during their design process, they can test it in-situ, and touch their design, and/or make modifications based on the physical printout.”

You can read more on the project in the research paper submitted in the proceedings of CHI ’16.

Of Course the New Craftsman Storage Cabinets Include Bluetooth Technology