Cute Robots. Perhaps two words not heard together often. Cool Robots, yes. Fleash-eating robots, sure. But cute? In this case, yes! The Pingbot is a testament to what Instructable user Tomdf can do with a piezo buzzer, IR control, some electronics skill and a sense of humour. Oh and of course, a 3D printer. Tell me if you didn’t laugh after watching this. Come on, don’t lie! That is a CUTE ROBOT!

The Pingbot is Tom’s first attempt at making a robot consisting of more than a bare PCB and rough soldering (he’s gotten further than I have). 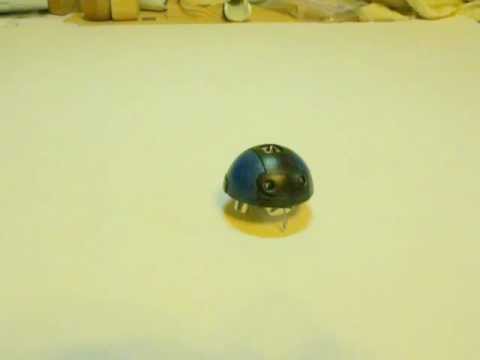 “I’ve built a few experimental robots in the past and, to be honest, they all looked the part. They were nothing more than circuit boards with wheels glued on.They did help me learn, but they just didn’t feel like completed robots. The main purpose of this project was to combine electronics and 3D fabrication into a robot complete in both form and function. A fun robot with a sleek look and a bit of personality. The second goal was to make the robot as small as possible, smaller than half a ping-pong ball (hence the name).”

I love the idea. What sort of robot is a robot if you can’t hug it or fear it? Thanks to 3D printing, Tom was able to make an appropriate shell to complete the Pingbot. If you wish to make a tiny Pingbot for yourself, take a look at Tom’s Instructable. Its complete with specs, schemas, parts list and instructions of how to make the 3D printed ‘head’ with Autodesk 123D.

Microsoft Surface Unveiled. The Age of CAD on the Tablet is Upon Us.