When we last saw YouTube creator ThisOldTony, his basic rear framework for a chainsaw-powered go kart was up and ready for action. Everything seemed to be going well… until he turned it on for the first time.

As it turned out, the worn chainsaw and sprockets were just too far gone and sensitive for any normal chain to power them for more than 30 seconds. So Tony finally gives in to a reasonable solution: buy new parts. 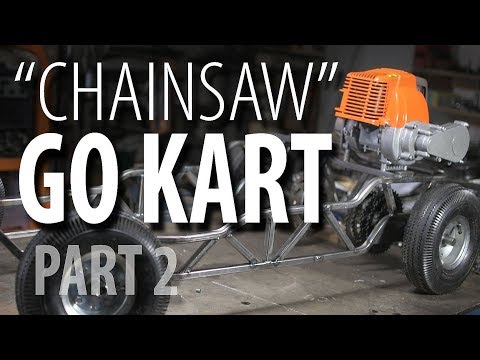 Thanks to the wonders of eBay, Tony was able to replace the old 46cc chainsaw motor and sprockets with newer, safer versions. The 50cc engine, in particular, runs at a lower rotation speed and comes with a continuously variable transmission (CVT), which means it pretty much has a built-in clutch. For the sake of saving time, he mounts the motor using four bolts and plans to connect the sprocket using a hub.

Tony wants his kids to be able to steer the vehicle, so he crafts some supports which connect the wheels to the go-kart while allowing them to move freely. To make movement smoother, he carves out a couple of plastic bearings.

With the wheels out of the way, he welds additional metal framework to form the front end of the go-kart. Tony is fairly sure this front end won’t connect properly with the rear, but he plans on adding a couple of connecting tubes later on so he can push and pull as much as he likes until the parts meet up.

Tony takes one final pass at his new motor and sprockets. He attaches his motor to see where it lands on the go-kart in relation to the front and rear frames and adds a brake caliper on the rear right of the cart. He’ll leave the rest of the mechanics for a later date but for now, completing the frame is far more critical.

Putting the two frames together requires hammering in the aforementioned connecting tubes into the metal frames and welding them together. The technique seems a bit forceful, but with enough brute force, the final go kart frame finally emerges.

He’ll need to remove most of the hardware and clean it down to give it a nice sheen, but otherwise, this go-kart measures roughly four feet and is still relatively light.

The next video will focus more on the electronics, steering, and overall control of the vehicle (which sounds way more fun than welding go kart frames together). You can find all of ThisOldTony’s other builds over at his YouTube channel.

Cool Books of Doom: How to Draw by Scott Robertson