Anyone who has visited a house (or hall) of mirrors before will know just how disorienting the experience can be. To summarize, you have to make your way from one end of a mirror-filled room to the other without accidentally banging your head on the wall. It can be a tad confusing but if you look at the floor or ceiling, you’re sure to get your bearings and find your way out.

But what if both the top and bottom were also made of mirrors? 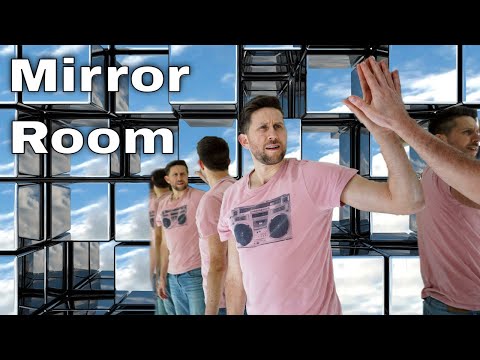 That’s what James Orgill of The Action Lab did. However, instead of a room as big as a hall of mirrors, James’ magnum opus is roughly the size of a small storage closet. But don’t be fooled because despite its size, the degree of discombobulation it can make is out of this world! Creating it, nonetheless, is no joke.

The biggest issue James had when making his mirror room was placing the mirrors on the floor. Most high-quality mirrors are made of fragile glass, so he had to make sure the surface underneath the floor was flat and hard to prevent the mirrors from breaking. Once he got that done, however, the rest of the mirror room was a cinch to assemble.

Entering this mirror-filled room feels like jumping into a kaleidoscope. Since we can’t be there in person, it’s almost impossible to tell what is a reflection and what is real. According to James, the experience is like looking out of a building with reflective walls. So, if you fear heights, this room could probably trigger your acrophobia.

He then did a bunch of tests – which is the scientific way of saying that he played around inside the mirror room. He bounced a ping pong ball on the floor, shone bright lights and laser pointers at the mirrors, and generally acted like a goof inside this enclosed space.

While the room seems infinite, it is still that small, old space. As a matter of fact, if you look closely enough, you can count the exact number of reflections the mirror room can create. This is due to the fact that mirrors only reflect about 95% of the light directed at them. As each reflection bounces off another, the amount of light gets less and less – up to the point where you can’t see the succeeding reflections. According to James, only the perimeter of the mirrors is infinite and not the area reflected.

James’s mirror room may not be as big as the ones you see in amusement parks, but I’d love to see the concept gets implemented commercially. Imagine ordering one on Amazon and getting lost inside a large mirror room where the walls, floor, and ceiling are all reflective! That would be awesome!

Best Hand Mixers for Your Kitchen This 2021