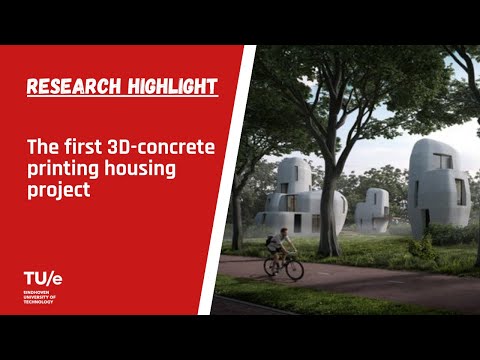 Dubbed Project Milestone, these houses will be built consecutively as construction improves over the course of the project.

The first house to be built in the new residential district will be a single-story living space with three rooms, a wooden roof structure (meaning it won’t be completely 3D printed) and cover 95 square meters. As for the succeeding homes, they will have more than one floor and feature 3D printed concrete floors and roofs (making them completely 3D printed).

Printing of the first house will be done by a concrete printer at the Eindhoven University of Technology and start this year. The building will be ready for occupation mid-2019, but they’re hoping the process will be shortened as they get more familiar with it. The succeeding houses will be printed by an on-site printer, further shortening production time.

As for the design of the houses, well, see for yourself. They aren’t exactly residences you’d find in a suburban neighborhood; more like hollowed-out boulders repurposed as living spaces. Thanks to 3D printing, constructing these irregularly-shaped buildings is a lot easier than chiseling concrete.

Other advantages of 3D printing besides a freedom of form include reduced carbon dioxide emissions when making the concrete as well as being able to customize the house layers. Different colors and wall materials with varying functions can be applied to specific areas of the house depending on their purpose. Instead of mixing in a different batch of concrete for another wall, an engineer can program the 3D printer to change the composition midway through printing, making it a lot faster and convenient.

They may not have been pioneers when it comes to 3D printing houses, but they sure want to make theirs as post-modern looking as possible. You can find more on these boulder-looking bunkers on the Project Milestone webpage.