Nobody likes getting stung by bees, but all things considered, bees are actually kind of amazing—and are essential to any ecosystem. The only reason a bee would sting you is if you agitate it or get too close to its beehive. Wasps, on the other hand, are like living darts with a bad attitude; they make their nests in the most inconvenient places and make it their job to sting anything that strikes their fancy. While a beekeeper handles an unwanted beehive in Belgium, an unwanted wasp nest is a job for the fire department.

So when these nasty buggers make their home in Ben of YouTube channel PressTube’s backyard, he doesn’t bother calling the firemen; he just grabs 24 pounds worth of aluminum, melts it in a crucible, and dumps it right inside the wasp’s nest. The result is an aluminum-casted wasp’s nest which can be used as a house decoration. 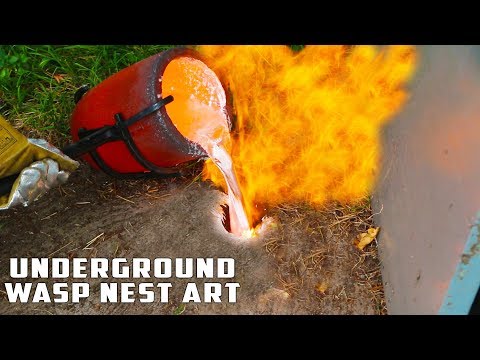 Instead of using the crucible he usually uses, Ben has to use a much bigger cauldron to hold the two huge blocks of aluminum he’ll be melting down. Since you can’t determine the size and depth of the wasp nest without digging it up (and getting stung in the process), he figures it’s better to pour in too much aluminum rather than too little.

After putting up some metal sheets to protect his neighbor’s chicken coop, he pops the first aluminum ingot into the crucible and sets it in the furnace. Once the first ingot has become a liquid, he proceeds to add the second ingot and melt it down.

With a 38 pound (17kg) crucible worth of molten aluminum, Ben carefully picks up the cauldron with specialized tongs and proceeds to pour the mixture into the wasp nest. The resulting inferno is both satisfying and mesmerizing to watch. As a whole colony of wasps meet their fiery demise, he can rest easy knowing they got the message to never make their home in this neighborhood again.

But the work isn’t done. After letting the aluminum cool off, he proceeds to dig up the wasps’ abode using a shovel; unraveling a 24 pound (11kg) nest filled with dead wasps. He cools down the aluminum using a garden hose before filling up the hole with extra soil.

Undoubtedly, the best part of this process is seeing the nest turned into a table decoration. While neighbors and visitors will be asking about who made this piece of art, Ben will be telling them about the time he poured molten aluminum down a backyard wasp nest to keep the pests out.

The PressTube YouTube channel has tons more videos where Ben makes (and breaks) a lot of awesome things. We previously covered his casting of 1,000 soda cans into aluminum ingots, so be sure to check it out as well!