The thing I love most about pizza is how you can literally put anything on it and it will still be a pizza.

The worst thing about pizza? Making it. With no culinary expertise whatsoever, your entire pizza crust could end up as undesirable as the cornicione; not to mention the mess and the effort of assembling the pizza itself! So, it’s really a relief we have pizza delivery.

Despite living in Brooklyn, New York where pizza parlors are everywhere, inventor Joseph Herscher of Joseph’s Machines decided his newest machine would be used to make everyone’s favorite Italian dish: 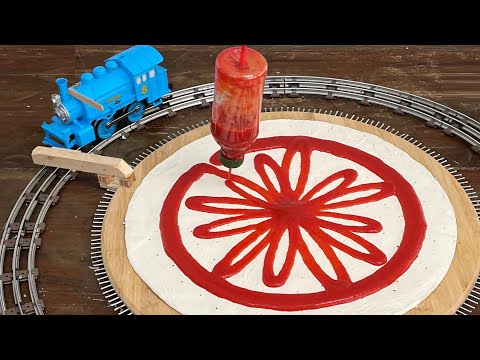 With a mechanical toy train as the crux, Joseph created a Rube Goldberg machine that can prepare you a pizza. Provided you get the ingredients and place them on the machine beforehand, it will move like clockwork. With all of the details, the machine looks like a very complicated replacement for a pizza chain’s pizzaiolo.

In his video, Joseph’s machine started the process by applying the sauce. As the train passed by its first station, it released a bottle filled with red tomato paste over the dough. With a little push from the train and a (hopefully clean) comb, the sauce was evenly distributed on all sides.

Next was the cheese. After lightly drizzling some shredded cheese over the pizza, a padlock struck a domino chain which pushed a ball into the way of the train. This ball activated a whole new contraption on the other side of the pizza.

The scene featuring a ballerina figurine was the most tedious part that Joseph had to carefully prepare. Not only did Joseph have to slice the meat beforehand, but he also had to find the right speed at which to drop each slice of pepperoni. Too fast and the slices could spread willy-nilly over the pizza. Too slow and there would be areas with an uneven amount of toppings.

As the pizza finished its pepperoni rotation, the train had one more stop to make: the olive Ferris wheel.

Unlike the ballerina, getting the Ferris wheel to drop tiny fruits onto the pizza seemed much easier. Thanks to the even spacing of the carts and a small wooden slope, the olives easily rolled to their destination and embedded themselves onto the pizza’s sticky sauce.

Unfortunately, Joseph’s machine can’t heat the pizza. He instead employed the use of a highly sophisticated oven to get the job done.

After baking the pizza, Joseph cut off a slice and brought it back to his machine. Prior to that, he changed some parts of the pizza maker to instantly turn it into a pizza feeder.

It isn’t perfect by any means of the imagination, but the machine practically gets the job done. Most of all, this seems like a good alternative to get more slices of hot pizza if you are too shy to order another box.

How to Create a COVID-19 Paper Mache Model