Quick! Off the top of your head, what do you think is the weirdest speed record out there?

Soda can opening? Pen clicking? Toenail clipping? All good answers with their respective record ranks. But for speedrunner and challenge taker SmallAnt, one of the strangest challenges he has ever undertaken has got to be pencil sharpening. 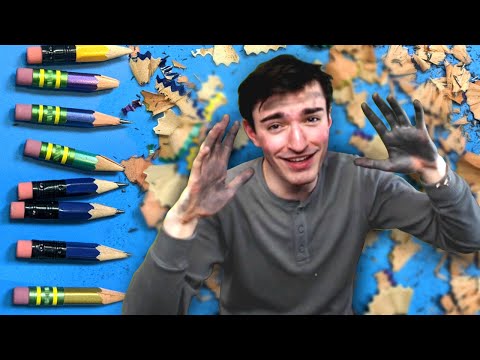 His video documents his entire journey from a pencil-sharpening novice to being a master human sharpener over the course of half a year. After seeing a bunch of weird speedruns in a YouTube video, he has taken note of the pencil-sharpening speedrun and has decided to look it up a month later.

Lo and behold, there are two types of records under pencil-sharpening: “drillless” and “drill.”

Drill speedruns allow the person to attach the pencils onto a drill and rotate them super fast, resulting in mostly hands-free, harmless pencil sharpening. Drillless speedruns will simply require you not to use a drill or any type of automated machine; everything else is fair game.

SmallAnt decided to take on the 10-pencil drillless speedrun, which at the time only had 7 speedrun attempts with the best time of 35 minutes and 35 seconds. And so begins this man’s decent down the pencil sharpening rabbit hole.

What started out as an idea for a dumb video quickly became SmallAnt’s obsession over the course of a few months. Using different pencils, sharpeners, and sharpening techniques, he experimented on what would be the fastest and easiest way to get 10 pencils down to nothing.

His first run was… not his best. Using two different gloves in one hand (one smooth one on his left to rotate the pencil and a rough grip glove to hold the sharpener), he quickly realized the added protection was just slowing him down. He removed the gloves to continue the run and while his sharpening time does increase, so do the blisters on his hands. At the end, he finished at 49 minutes and 18 seconds.

SmallAnt’s subsequent attempts at the pencil sharpening world record follow a pattern. He’ll take a break for a couple of weeks to recover from his blisters, only to see more people get added to the pencil-sharpening speedrun board. Never one to be disheartened, he found out that the more you sharpen the pencils the more the quality of the sharpeners tends to go down as you use them.

Things go this way for a while until a pair of pencil-sharpening madmen going by the names FootCream and bgrimm34 (obviously not their real names) found a way to sharpen 10 pencils in little less than 4 minutes. By holding a special pencil sharpener in between their feet and using both their hands to rotate the pencil, they destroyed the previous world record of 11 minutes like it was nothing.

After this display of sharpening prowess, SmallAnt was about to give up his attempt of breaking the world record, but not before FootCream and bgrimm34 messaged and decided to help him break their own records. They gave him a bunch of brand new sharpeners like the ones they used, along with tips on how to properly utilize their patented foot sharpening techniques for good.

Armed with the sharpeners and knowledge, SmallAnt tried to break the record once more… and failed. It was here where he found a better way to sharpen pencils without the use of your feet. Instead of bending over backward to reach your legs, SmallAnt found it was easier to put the pencils between your knees. By wearing a pair of shorts so the pencils make contact with your skin, you can keep the wood from moving while getting the most sharpening done with your upright posture.

With this final piece in his speed-running puzzle, SmallAnt was able to sharpen his way to the top with a time of 3 minutes and 38 seconds – 12 seconds faster than FootCream’s time. It may have seemed like a dumb record to break at the time, but thanks to his hard work, dedication, and some help from the previous world record holders, SmallAnt was able to achieve his dream of accomplishing one of the world’s weirdest records.

If you look at speedrun.com now, you’ll still find SmallAnt at the top of the boards. He even managed to get a better time, sharpening 10 pencils drillless in 2 minutes and 21 seconds. Not bad for someone who, just months ago, was but a young grasshopper in the world of pencil sharpening.

Weaponsmith Tod Cutler Delves Into the Design of Medieval Swordbreaker