To begin with, I don’t know whether to file this under ‘Fabrication’ or just plain crazy—but either way, it’s definitely a spectacle to behold. In preparation for the launch of the new Nike Free Flyknit (a mashup between the popular Flyknit shoe and Nike Free Midsole), Nike China decided to pull a ‘guerilla-yet-not-really-guerilla’ marketing campaign on one of the busiest streets in Shanghai. Starting with a plain billboard of a bare foot, what happened next is surely something that needs to be seen to be believed. Here’s the process…

Coinciding with the global launch day of the Nike Free Flyknit, three workers dressed head to toe in Nike gear (because why not?) setup camp using Nike’s Nanjingdonglu flagship store as a backdrop to complete the massive knitting task. The reasoning for the massive scale and 3D-approach was to emphasize the construction of the shoe and drive home a point that a plain old 2D picture just wouldn’t do. Using giant threads created in the signature Volt colorway that has become synonymous with cutting-edge Nike releases (Remember the 2012 Olympics Track and Field shoes?), the crew stitched together the behemoth shoe over the busy streets of Shanghai before finishing it off with a gigantic Nike Free midsole: 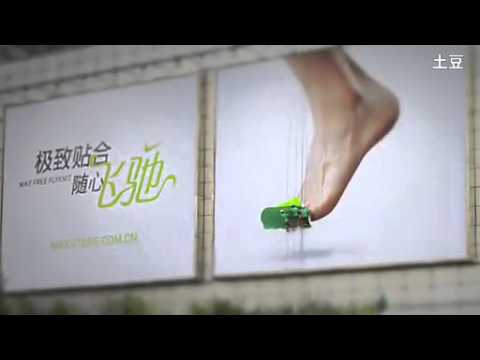 The stunt was envisioned by Nike China and advertising agency W+K Shanghai.