Spider-Man, Spider-Man, does the things his costume can. Why else would he wear red-and-blue tights out in public? The Spider-Man costume is the most iconic ever.

Ever since his first appearance in 1962, Peter Parker and his other incarnations have donned countless suits to hide their identities from their enemies. But even with the changes to the classic costume, certain distinguishing characteristics have remained. The wide eyes. The webbing pattern. The iconic webshooters. At least one of these things manages to make its way in some form or another into a Spider-Man costume.

In lieu of his new high-tech suit in Spider-Man: Homecoming (a movie which you should totally watch), Sony Pictures and Goodwill teamed up to give six YouTubers a chance at making their own Spider-Man costume. The Spidey suits were featured in a contest to promote the film and the designs were a mix of all sorts of ideas and materials.

Let’s take a look at our fav, the one created by Elizabeth Rage, a crafter and cosplayer at AWE.me‘s DIY Cosplay Shop. 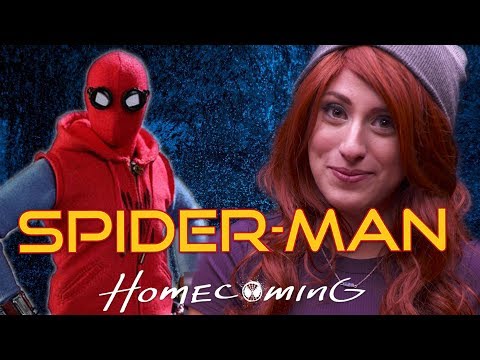 Taking inspiration from Spider-Women Gwen Stacey’s costume and incorporating it into the traditional red-and-blue color scheme, Elizabeth plans out the makings of a costume that is both modern while harkening back to Spider-Man’s roots.

After drawing the initial vertical webbing on red cloth, she then fits the rest of the costume with blue stretch velvet turned on the opposite side and covers it in hexagonal mesh. The hexagonal mesh comes in handy, creating its own shadows to make any material look like it belongs on a superhero costume.

But in case you don’t have any mesh on hand, or want to keep with the whole “hero on a budget” feel, you can also stamp hexagons onto your costume by using a silicone pot holder and acrylic paint. The paint should be a darker shade of the cloth you want to print it on, to give the illusion your costume is way cooler than it actually is.

Now for something completely different: a hoodie! Like the Spider-Gwen costume, Elizabeth decides to add a hood into her cosplay by cutting a midriff in a red hoodie and sketching one of countless spider logos onto the front.

Now all she needs to do is add a pair of fingerless gloves and complete the horizontal webbing on her costume!

Possibly the most difficult thing about cosplaying or drawing Spider-Man is the amount of webbing covering him. It may have been easier back in the day, but Stan Lee obviously never had the foresight to see that his dime-store comic book hero would one day be the face of an entire company. Needless to say, Elizabeth makes quick work of the rainbow-shaped webbing by working from the bottom with a Sharpie and spreading it throughout the entire costume.

Though she doesn’t show it on camera, Elizabeth adds more texture to the webbing by applying a mixture of puff paint and liquid latex. The latex serves to make the paint more stretchable so that it won’t flake off after hours of swinging around the city.

Don’t forget to wear a pair of classic red Chuck Taylors and voila, you are now ready to save New York… or look like you can save New York. The finished costumes were featured by Sony and judged by none other than the newest Spider-Man, Tom Holland, himself.

You can see what he thought about the costumes here, and if you want to see more of Elizabeth and her cosplays, check out the rest of AWE.me’s DIY Cosplay Shop’s videos.