If you are a fan of Do-It-Yourself projects and homegrown pyrotechnics on your patio, then there is a chance that you have heard of a tinkerer named Grant Thompson. This is a clever guy who has made a name for himself by building a host of fun (and mostly dangerous) devices from easily-sourced materials and household ingredients. The self-proclaimed “King of Random” has over eight-hundred thousand subscribers on YouTube and has undoubtedly inspired many minds with his captivating how-to instructional shorts. But, there is one video of Thompson’s in particular that might imply a level of real-world potential that goes far beyond the musings and novelties found in most life hacking videos. In Burning Stuff with 2000˚F Solar Power”, Thompson demonstrates that the awesome power of the sun can be harnessed cheaply and on-the-fly using the lens component from the screen of a rear-projection television set, and the results are shocking.

If you are familiar with the high-end televisions of yesteryear—then you probably remember rear-projection technology, which was the driving force behind the big, heavy, floor-standing clunkers that used to be the top-dogs in the AV world. Rear-projection televisions used a large transparent plastic lens the size of the screen itself to focus the image onto the front panel—a process completed entirely inside of the gargantuan units. In many of the televisions that employed this technology, the optic of choice was the Fresnel lens—the revolutionary 18th-Century innovation that once turned lanterns and lighthouses into sensible tools. The sheer size of a salvaged rear-projection television lens, combined with the Fresnel architecture, happens to make it ideal for gathering sunlight and concentrating it into a focused beam—like a magnifying glass on steroids. In both Thompson’s video and a in a similar short by Dan Rojas, which Thompson credits, you can see the incredible amount of energy transfer that these relatively simple sheets of plastic are capable of facilitating. In a refined version of the simple models that these two guys had built respectively, Rojas managed to add solar-tracking capability to his design and ultimately reached a max temperature of 3800˚F. 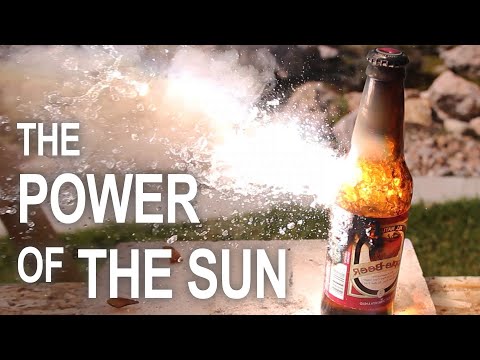 Now of course, one could argue that a solar panel the same size as a large rectangular lens would collect just as much sunlight, but it would simply be dispersed throughout the surface of the panel, rather than focused to a point. This is true, and in terms of collecting sunlight from a maximum number of angles throughout the day, a flat panel that does not need adjustment seems to make more sense than a lens which needs to be constantly re-angled. However, the cost of high-quality photovoltaic (power-generating) solar cell components is very high, and consequently, building large solar panels is expensive. Thompson and Rojas have proven that even an imperfect molded-plastic plastic lens is extremely effective at focusing light, and that notion begs the question: Can we use big lenses to run small-scale power-generating apparatuses that are cheaper to manufacture than large photovoltaic solar panels? If the answer is yes, then it is possible that the solution might not even involve solar panels at all…maybe these lenses could be used to generate steam power, or to operate Peltier plates. It is certainly some food for thought, and it will be interesting to see how the future of lenses effects the solar industry in the coming years, as solar-tracking options become more abundant and affordable.

(Images via King of Random/YouTube)