Kniterate is One Step Closer to Their 3D Printing Garment Platform

Remember Openknit? The open source knitting machine made from 3D printed parts? Creator Gerard Rubio is back with the next generation of making DIY clothes easy and more accessible.

Rubio’s new startup is Kniterate, which is communicated as ‘the platform for 3D printing garments’. Similar to Openknit, the idea is to make it easier and more efficient for you to create custom clothing and accessories. All you need is A) the design software and B) the knitting machine. Kniterate brings these together, but unlike ever before.

So how is Kniterate different from OpenKnit (or others)? Where OpenKnit was a large, custom built device used to fabricate garments through the Knitic open-source knit software, Kniterate is an entire platform that includes its own proprietary web-based design software and an all new (yet to be released) knitting machine. When compared together, it’s quite a contrast, but easy to see how one led to the other, and they’ve learned some things along the way which in turn led to a better machine and improved fabrication.

“We have been able to build our machine thanks to a partner that manufactures this type of technology for industrial purposes,” Gerard tells us. “Most of the manufactured parts require a lot of accuracy and strength to make a reliable and durable machine. To achieve that, machining, cutting/bending metal, and casting parts is involved – operations that require mass manufacturing to have a reasonable cost. So, we think making it open source would not allow regular people to replicate our machine, only companies with a nice budget and a proper infrastructure.” 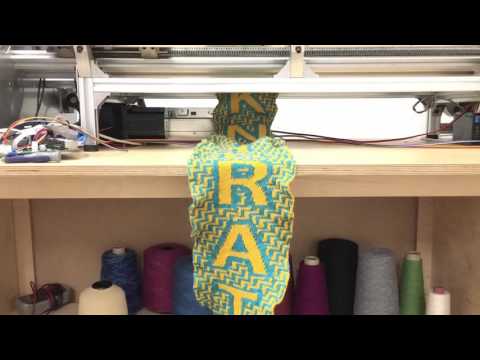 Kniterate aims to simplify the business of making clothes. The steps to start creating are easy: digitally design clothes through their online software, choosing from templates for different garments. From there, you pick a pattern, size, details, and even text you want on the garment before sending it to Kniterate’s knitting machine. That part isn’t available just yet, as the team is working on fine-tuning the design and mechanics along with talking to various manufacturers for future manufacturing partnerships.

“Together, we are focusing all our efforts on Kniterate and very excited to have done this for a few years already. We have plenty of ideas for future Kniterate machines, so there will be more for sure,” explains Gerard. “I’m personally very interested in the democratization of manufacturing technology and I’d like to see this new tool expand across many more fields.”

Gerard went on to give a somewhat cryptic hint as to the future of digital clothing manufacturing and what’s to come after the completion of his new machine. “I’m sure there will be new machines that will bring lots of new opportunities at the local level, with new business and social synergies developing from that. Kniterate is part of this revolution and we won’t stop offering better tools and adopting others.”

When the design is finished, the file is sent over to the Arduino Mega-driven knitting machine, which features 80 five-gauge needles to make the garment. The current machine prototype can print a complete scarf in about two hours. Rubio hopes the next prototype will be faster and equipped with 240 needles.

Along with the software and the machine, the Kniterate team’s plan for the platform is a community-driven site where people can make and share clothing with each other. When you think about it, it’s surprising this really hasn’t been done yet.