Need a fix of retro nostalgia mash-up? We’ve got one to make your drool tubs.

Colin of Why Not Make It is to blame for your sudden craving to combine a 19080’s boombox and Super Nintendo (Chalmers). Being born in a time where the video games were simpler/better and the music players a lot bigger/doper, he took it upon himself to combine the two. The result is a battery powered machine which can play classic Nintendo games AND yo’ funky tunes. 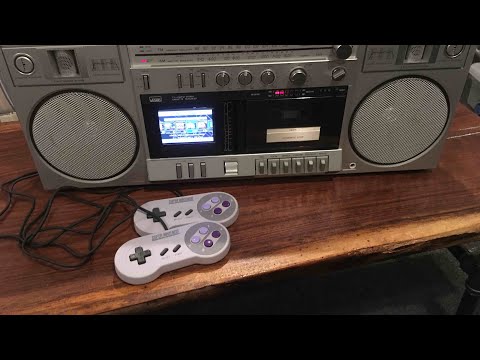 According to Kotaku, Colin took an hour every day after his day job to work on the project. After a week and roughly $250, he finally managed to get all the wiring inside the boombox and have it play cassette tapes, the FM radio and, YES, video games.

The boombox in question is an old Montgomery Ward GEN 3998 boombox, which conveniently houses a small black-and-white TV screen next to the cassette deck. In order to play colored SNES games, Colin took out the factory screen and replaced it with a small LCD screen. The SNES components are pretty much just wires and a tiny circuit board, so he had no trouble fitting the console’s innards and controller ports into the bottom left of the boombox casing, just below the speaker.

The whole thing runs on a rechargeable 12-volt battery pack he attached to the back of the casing. The extra power is needed since he also added an HDMI cord and audio extractor which connects to the LCD screen and boombox speakers. And since playing games on a tiny boombox screen isn’t exactly practical, Colin added an HDMI splitter which allows him to connect the boombox to a larger screen. The battery runs for half a day on a full charge, but the novelty in being able to carry a boombox around, walk up to the basketball court and play some Marioworld, is just timeless.

Now that his SNES-box is a success, Colin plans to retrofit other gaming consoles into the old school music players as well. Check out the part breakdown and more on his website, Why Not Make,  and expect to see more retro gaming consoles to be fitted into outdated sound-producing fossils in the future!