Do you own any action figures? You know, the ones with so many points of articulation than you know so you just keep them in the same two or three poses for all eternity?

A YouTuber going by the name of the Animist has a ton of these well-articulated figures. But instead of posing them once and placing them on a shelf, he thought it would be better to make some kickass stop motion animation videos where they could interact with one another and everyday objects. 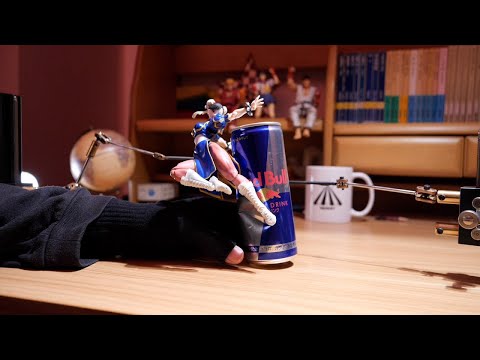 One of his recent videos features Street Fighter character Chun-Li fighting against a can of Red Bull in a sick, 41-second stop motion flick. And thanks to his behind-the-scenes video, we know exactly how he went about making it.

It takes a lot of time and effort to pose multiple objects for stop motion animation. With this, the Animist storyboards the entire film on paper first. This allows him to plan out all the actions, effects, and camera angles he’ll have to put in to make it look as close as possible to the classic Street Fighter game.

As you would expect, making the Chun-Li figure move involves a painstaking amount of effort. The Animist has to carefully position and reposition each of her parts in each frame – that includes all her articles of clothing like her hair bun covers and her martial arts outfit.

To keep her steady as each frame is being photographed, a stand affixed with double-sided tape is placed behind the figure and adjusted whenever Chun-Li has a drastic change in her pose or positioning.

The interchangeable hands and faceplates also play a big role in conveying the character’s emotions and actions!

Of course, Chun-Li isn’t the only one fighting here. Her opponent – an ordinary can of Red Bull – has just as many animation frames as she does.

Seeing as there isn’t a well-articulated figure of a Red Bull can (at least, not that I know of), the Animist has to properly dent a single can over the course of the entire fight. Starting with a diagonal dent on the front and ending with a flattened can at the end, the damage has to properly reflect on the points of impact where Chun-Li manages to hit it.

Just like its opponent, the Red Bull can is suspended using a similar stand with double-sided tape on the end.

To create the illusion of dust as the characters whip around at breakneck speeds, he places bits of cotton behind the parts which have the most movement. This not only saves him from having to add them digitally in post, but it also makes the fight look much more grounded and believable. He even uses cotton later to overlay kicking effects over Chun-Li’s legs!

Likewise, Chun-Li’s signature energy attack (the Kikoken) is given emphasis, thanks to some blue lighting placed above the stage and a humidifier that billows smoke just below it.

Once the Animist has done all he can do physically, it’s time to edit everything digitally. He places the cotton overlays he created earlier over Chun-Li as she kicks the can of Red Bull. He also added some lens flare effects to give the energy projectile some more oomph.

By far the most obvious changes are the heads-up display of the fighters’ health bars and the removal of the stands behind Chun-Li and the Red Bull can. Since the Animist used stop motion, he has to remove the stands in each frame they are visible in.

Lastly, he adds some audio effects using a mix of stock audio as well as recordings of a Red Bull can being crunched with his hands.

Mix it all together and you have a 41-second video that has taken hours to make. Is it worth the effort? 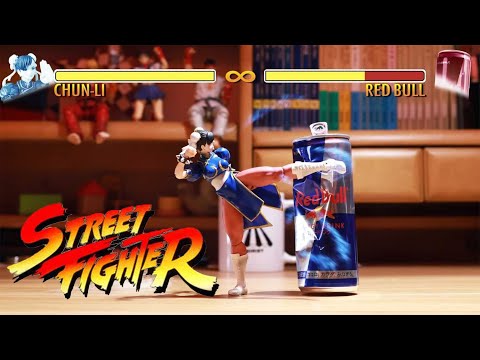 You bet it is. The sleekness of the animation combined with the audio and visual effects make this one satisfying video to watch. By adding more changes in each frame and increasing the number of frames, the Animist is able to make each and every one of his videos a delight to watch.

All of his work can be found on his YouTube channel. He usually posts the finished video first, closely followed by a behind-the-scenes look which delves into the creative process that went into making it.