Who needs guns that shoot bullets when you can fire a ball of plasma?

The ‘plasma popper’ is a slice of future created by Mr. Al Stahler. It’s an ingenious use of transparent plastic tubing and an ignited ball of methylacetylene-propadiene propane (MAPP gas). It isn’t a kid’s toy, but it sure does look pretty when you use it at night.

Seeing as this is a very basic device, not many people would shell out $400 for a plasma popper (which would likely only see use for 30 minutes after you bought and maybe during parties). Thankfully, YouTube user Doctor WOW has a great tutorial to show you how to make your own. 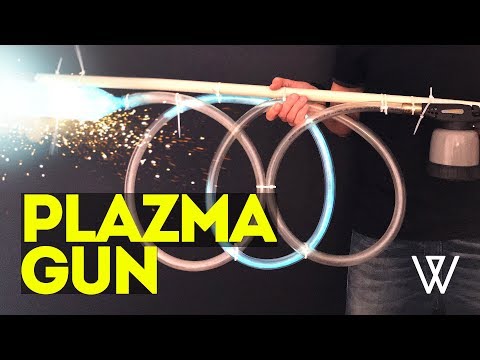 Here’s what you’ll need to build your plasma (propane) popper:

Using a gas torch (with piezoelectric trigger), rigid PVC pipe, 5/8 ID (7/8 OD) flexible vinyl tubing, zip-ties/plastic straps, and a plastic bottle, you can make a simple plasma popper that, while not as flashy, is just as effective as Al’s original.

Before making the plasma popper, Doctor WOW drills a small hole into the bottom of the plastic bottle as an opening for the gas to escape. He then attaches the PVC pipe to the gas torch using the zip-ties.

Once this is done, he proceeds to attach the gas torch and flexible plastic tubing to the PVC pipe. Using a number of zip-ties, he arranges the tube in a spiral so the plasma can build up and be seen by onlookers. The traveling plasma also makes a satisfying tumbling sound before ejecting through the bottle.

Speaking of the bottle, connecting it to the plastic tubing requires a small bit of work, but that’s as complicated as this build gets. Heat the end of the plastic tubing with a heat gun or hairdryer so you can expand and fit it around the mouth of the bottle. Once heated, use a pair of pliers to widen the tubing and slip it around. Add a zip-tie at the attach point for good measure.

Attach the bottle to the stick and you’re done! What costs $400 is easily done with materials from the hardware store and a bit of elbow grease. It’s not as fancy as the original, but it will still liven up occasion.

You can find more of Doctor WOW’s life hacks and tricks over on his YouTube channel. And, if you want more guides on how to make this device, check out a great Instructable here and Beals Science video here.

Learn the Science of Great Ideas in This Entertaining Short